Ronda Rousey is embracing motherhood like a true champion. The 34-year-old professional wrestler may be a fighter in the ring, but on Oct. 17 Rousey showed off her maternal side. The UFC star took to Instagram to share an intimate photo with baby La’akea, whom she affectionately calls “Pō”.

“Our boys asked me the other day how I’m gunna feed Pō on the plane when we take her with us to Hawaii,” the WWE pro captioned a photo of her breastfeeding her baby girl. “And I was like ‘uhhh, same way I always do.’ Then it occurred to me that they probably never seen anyone breastfeed before and weren’t sure if it was appropriate in public.”

“Motherhood’s some badass, primal, beautiful shit that shouldn’t be hidden,” Rousey continued. “It still blows my mind that my body assembled this little person, pushed her out and now makes everything she needs to thrive. It’s really nothing to be ashamed of, it’s something to brag about #normalizebreastfeeding #proudmama.”

The athlete looked beautiful as ever in the makeup free selfie while her baby girl wore a simple knit cap. Fans flooded the comments section with loving statements of positivity and support. Grown people eat in public, babies should be allowed to too. It’s that simple,” one follower wrote. “You now own the greatest title of all … mother,” another said about the Olympic medal winner. Another fan added, “Breastfeeding is the most natural thing to do. Some people just judge and nothing you can do. My partner breast feeds too, screw the haters hahaha your baby comes first over their opinions lol.” 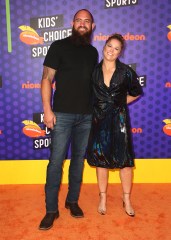 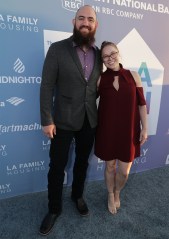 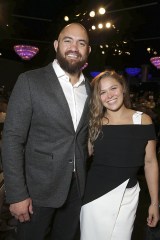 Rousey UFC fighter Travis Browne got engaged on April 20, 2017 and married days later on August 28 in Hawaii. Six months later, Rousey announced that she was pregnant with her first child and in September 2021 the couple welcomed their daughter together, La’akea Makalapuaokalanipõ Browne.