The ‘Fancy’ singer broke out an outfit that seemed to pay tribute to Hollywood Royalty during a California concert.

Say hello to Iggy Azaela‘s strange concert outfit! The 31-year-old singer debuted an Al Pacino-themed catsuit during a Wednesday September 20 performance at the YouTube Theater in Inglewood. Iggy’s catsuit was patterned with different shots from the 81-year-old actor’s classic movies like Scarface. She definitely seems like she’s a fan of the Hollywood icon, as she rocked the outfit.

Iggy accessorized the look with a bright blue corset, that matched her hair tie. She also had a few streaks of blue throughout her bleach blonde ponytail. She tied the whole look together with a pair of black high heels. She looked great in the Pacino-print piece, even if the pattern did feel a little strange. The “Kream” singer is currently on tour with Pitbull, 40, as a special guest for his “I Feel Good” tour. 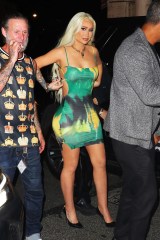 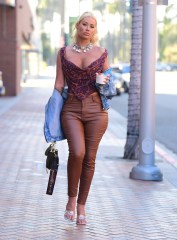 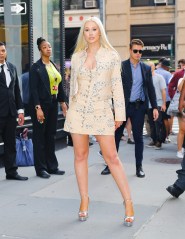 Iggy is on tour behind her newest album The End of An Era, which dropped in August. The singer alluded to the fact that she may be taking a break from music after this record in a July tweet. “[I am] going to take a few years to focus on other creative projects and things I’m feeling passionate and inspired by, beyond music,” she wrote. Perhaps she’ll be able to work with Al Pacino on something? The rapper also recently celebrated the sixth anniversary of her Britney Spears collaboration “Pretty Girls” with the singer. The “Toxic” vocalist raved about working with Iggy, and the “Fancy” rapper returned the kind words. “Loving you always you brilliant, too-genius-for this-world-to-understand, kind hearted, gracious & beautifully ethereal being. We are definitely two big ole goofballs in the best way possible,” Iggy commented on Britney’s post.

The Al Pacino catsuit is perhaps the most unconventional of the singer’s recent outfits, but Iggy has rocked plenty of similar looks in skintight bodysuits, like in July when she wore an all-black ensemble to show off some freshly dyed red hair or when she sported a sheer bodysuit in August. The singer has also shown off like a sexy orange dress to a World Dog Day celebration or a tiny green mini-dress while out partying earlier in September.