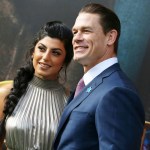 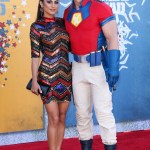 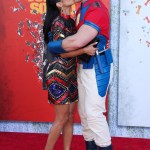 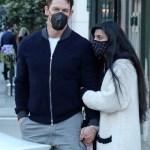 John Cena and Shay Shariatzadeh posed for gorgeous photos and flaunted PDA on the red carpet of ‘The Suicide Squad’ premiere as they wore fun and colorful outfits.

John Cena, 44, and his wife Shay Shariatzadeh didn’t hide their love for each other when they showed up dressed to impress to the premiere of his latest film, The Suicide Squad in Los Angeles, CA on Aug. 2! The WWE star shared a passionate kiss with the dark-haired beauty as he wore the same red, blue, and white superhero outfit he wears in the movie. She also wowed in a colorful striped metallic dress and strappy black heels.

In addition to proudly flaunting PDA, the lovebirds posed for cute pics on the red carpet as they held onto each other and smiled for the cameras. John’s silver headpiece totally gave off fun vibes and was a great way to get attendees to get excited about seeing the highly anticipated flick. Shay was fully supportive of her hubby as she stood beside him and rocked stylish earrings to top off her epic look. 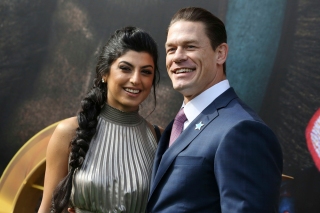 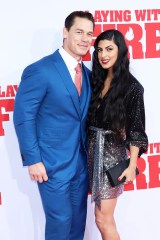 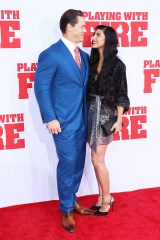 In The Suicide Squad, which is based on the DC Comics team of the same name, John played the role of Christopher Smith/Peacemaker, who is labeled as a ruthless killer who will try and achieve peace no matter what it takes. Other high profile celebs in the film include Margot Robbie, Idris Elba, Sylvester Stallone, and Viola Davis.

John and Shay’s appearance at the L.A. premiere comes just a month after they made headlines when John admitted he’s open to having kids. The lovebirds tied the knot in 2020 after dating for several months and it seems everything is going well as they have starting a family on their minds. “I’m a little bit older, a bit wiser. I’m realizing there is life and life exists and it’s beautiful — and I think part of that is being a parent, so we’ll see,” he told the British outlet The Sun in June.

John’s comment was a bit surprising considering his ex Nikki Bella, 37, whom he was romantically involved with for six years, claimed one of the reasons for their 2018 split was because he didn’t want kids. A source recently told us that despite his apparent change of heart on the subject, the Total Bellas star wishes him well.  “No matter what decisions John makes, that is his and Shay’s business,” the insider EXCLUSIVELY told HollywoodLife. “Nikki is happy for him and wishes him all the best.”