Gwen Stefani and Gavin Rossdale no longer have a relationship beyond co-parenting, but they were both there to support their seven-year-old son, Apollo, at his football game in Los Angeles on July 25. In photos from the game, WHICH YOU CAN SEE HERE, Gwen and Gavin appeared to keep their distance from one another as they watched the match from the sidelines. For the most part, Gwen was seated on a bench, while Gavin paced up and down the field to keep up with the game. At one point, he even seemed to be giving Apollo some words of advice while the youngster was on the sidelines.

The awkward reunion comes just three weeks after Gwen and Blake Shelton got married in Oklahoma. The two wed on July 3 in an intimate ceremony, and have been in newlywed bliss ever since. On July 18, Gwen even joined Blake onstage for a performance in Wisconsin, where they sang one of their country duets for the crowd. The two did not shy away from packing on the PDA onstage, and Blake even pulled Gwen in for a steamy kiss in front of the thousands of screaming fans!

Blake and Gwen’s wedding was officiated by Carson Daly, but for the most part, it was not a star-studded affair. Instead, the two kept things quite intimate. Of course, Gwen’s three sons — all of whom she shares with Gavin — were a big part of the special day. The two oldest boys, Kingston, 15, and Zuma, 12, were even signed witnesses on the pair’s marriage certificate! All three boys dressed up in tuxedos and looked so handsome as they posed for photos with Gwen and Blake at the wedding, too. 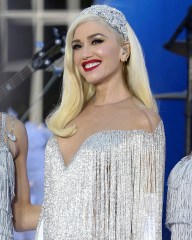 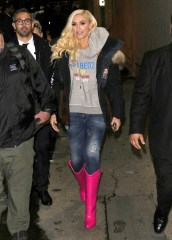 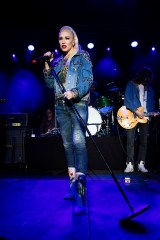 The pair’s nuptials were many years in the making, as Gwen and Blake first got together in the fall of 2015. The two fell in love while they were both coaches on The Voice as they were going through their respective divorces — Gwen and Gavin ended their 13 year marriage in Aug. 2015, while Blake divorced Miranda Lambert in July 2015 after four years of marriage. After five years of dating, Gwen and Blake got engaged in Oct. 2020, and the rest is history!