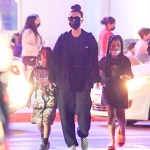 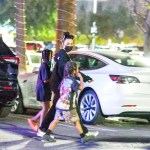 Kim Kardashian sizzled in an all-red ensemble as she supported ex Kanye West at the listening party for his highly anticipated 10th album with all four of their children.

Kim Kardashian, 40, snuggled her youngest child Psalm, 2, close at ex Kanye West‘s Donda listening party. The reality star was on hand to support the father of her four children, 44, at the exclusive event in Atlanta, Georgia on Thursday, July 22. Kim had a stoic look on her face as she held Psalm inside the Mercedes Benz stadium as Psalm inquisitively appeared to look out at the stage or crowd.

The 2-year-old rocked a Yeezy-approved ensemble with a black muscle tank and leather pants, along with a pair of Kanye’s foam runners by Adidas. Meanwhile, Kim looked straight off the runway in her head-to-toe red ensemble. The skintight outfit, reminiscent of something a race car driver might wear, included a bold zipper detail up the front. She paired the the look with a bold pair of black sunglasses, keeping her hair straight and center parted. Kim finished the bold outfit with a pair of red colored boots with a silver glitter heel. 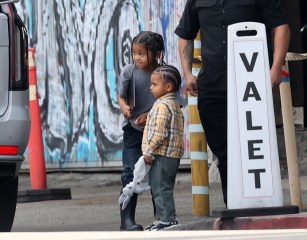 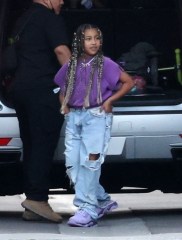 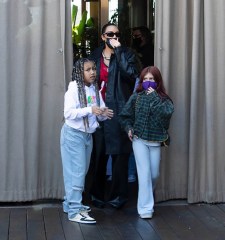 Kim was in attendance at the highly anticipated listening part along with her other children North, 7, Saint, 5, Chicago, 3, as well as sister  Khloe Kardashian, 37. The Good American founder supportively sat by her older sister amongst the crowd, also keeping her face hidden behind a pair of oversized shades. Khloe opted for a fitted black outfit with a turtleneck style top, rocking her blonde-highlighted locks in a loose beach wave. Despite Kim and Kanye’s on-going divorce, Khloe has referred to Kanye was a “brother for life” — even showing him some love on social media ahead of the event by liking three of his Instagram posts teasing new music.