Dakota Johnson, 31, and Chris Martin, 44, have been spotted for the first time in months, looking more loved up than ever. The 50 Shades Of Grey actress and the Coldplay frontman jetted off on a romantic European getaway, and were seen soaking up the summer sun in Spain on July 22. The couple were spotted riding a boat to shore for a stroll around the Palma De Mallorca, and linked arms while walking around after their boat ride.

Dakota donned a floral blouse with denim cutoff shorts, along with black sandals and a backwards baseball cap. Meanwhile, the singer cut a casual figure in a black tee with matching black shorts, and what appeared to be a brace on his right knee. Chris also wore a sweater wrapped around this shoulders, and a black baseball cap.

It comes a few months after rumors began to swirl that an engagement may be on the horizon. The couple, who are notoriously private about their relationship, have now been dating for more than four years and sparked speculation after Dakota was photographed shopping with a giant emerald ring on that finger. 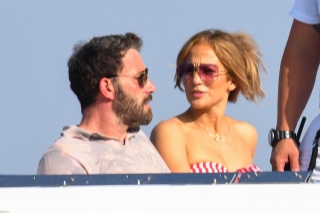 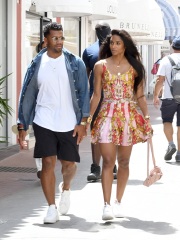 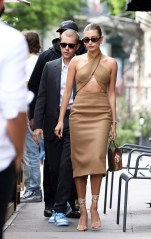 As seen in the December 2020 pics, it was a huge stone set in a delicate gold band, however the pair’s betrothal status remains a mystery. Should they get engaged in the future, Dakota would become a step-mom to the two children Chris shares with his ex Gwyneth Paltrow — Apple, 16, and Moses, 14. It seems she already has a great relationship with them, having hung out at the beach and the cinema in numerous sightings since she began dating their dad in October 2017.

It almost seems Dakota is part of the family already! Chris and Gwyneth have happily hung out together with their kids, along with Dakota, and Gwyneth’s now husband Brad Falchuk, 48. Gwyneth surprisingly gushed over Dakota in an issue of Harper’s Bazaar, which was released in January 2020. “I can see how it would seem weird because it’s sort of unconventional,” she told the outlet. “But I think, in this case, just having passed through it iteratively, I just adore her.”