Dakota Johnson, 30, is spending more time with boyfriend Chris Martin‘s kids! The 43-year-old shares two children with his ex Gwyneth Paltrow, 47, and the new couple were spotted spending time with Apple, 16, and Moses, 14, on June 13. The foursome hit the beach, and were clearly enjoying the dose of fresh air as California lifted some of its lockdown restrictions, allowing beaches to reopen.

The Coldplay frontman seriously couldn’t have looked any happier as he strolled along the sand with his Fifty Shades of Grey star girlfriend, and two kids who are looking more grown up by the day! The group later met up with some friends who had set up a beach picnic equipped with snacks, and items like surfboards and boogie boards for some afternoon fun in the water.

The English rocker donned a white sweater, black swimming trunks and a bright blue baseball cap, while Dakota looked cozy in an oversized black sweater. 16-year-old Apple looked chic in an oversized graphic tee and denim shorts, as she looked like her mom’s twin, allowing her long blonde tresses to blow in the wind. 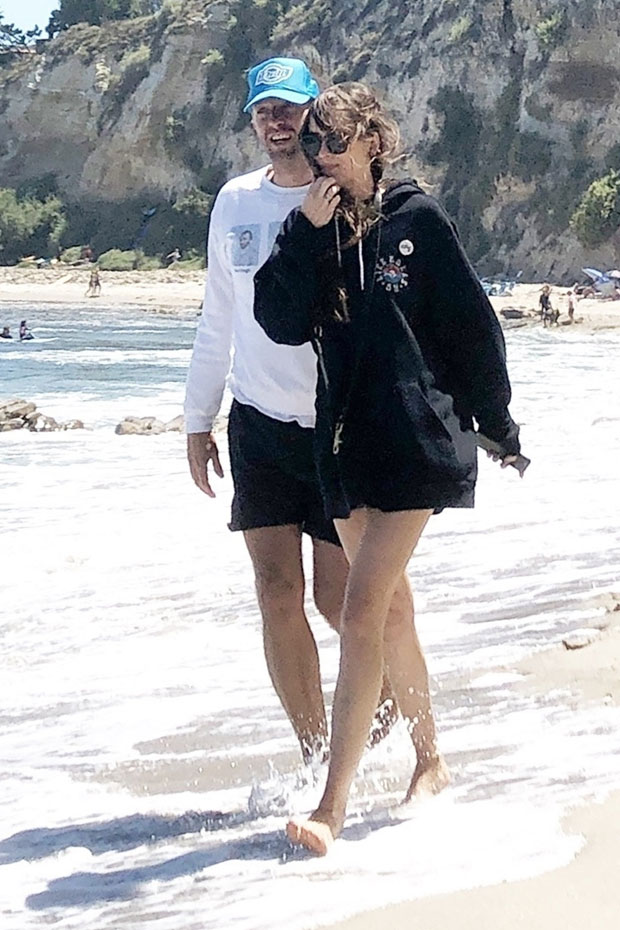 Back in January, before COVID-19 forced everyone into lockdown, Dakota joined the trio for a movie outing in Calabasas, CA. Although things can get awkward with separated parents’ significant others during custody arrangements, this family has proved to be totally different. Chris and Gwyneth have happily hung out together with their kids, Dakota, and Gwyneth’s now husband Brad Falchuk, 48, on numerous occasions and they always seem to have a great time!

Gwyneth surprisingly gushed over Dakota in the latest issue of Harper’s Bazaar, which was released on Jan. 7.  Since their ‘conscious uncoupling’ in 2014 and subsequent 2016 divorce, following 13 years of marriage, Gwyneth and Chris have maintained and incredibly amicable relationship. And the actress is in full support of his partnership with Dakota, even though she understands how people may think it’s a bit out of the ordinary. “I can see how it would seem weird because it’s sort of unconventional,” she said to the outlet. “But I think, in this case, just having passed through it iteratively, I just adore her.”