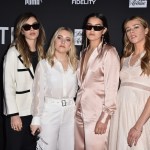 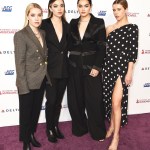 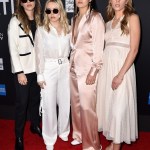 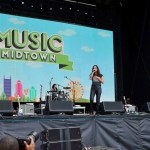 As Pride month comes to a close, The Aces – who recently celebrated with their Pridestream – say that now’s the time for the LGBTQIA+ community to ‘show yourself a lot of love’ and realize how ‘incredible you are!’

“There is truly nothing like the feeling of living in your truth and being surrounded by people who not only accept you but CELEBRATE you,” Cristal Ramirez of The Aces says when discussing PRIDE with HollywoodLife. With several members of The Aces identifying as queer women, Pride Month is a huge time for the group. The band – Cristal and her sister Alisa Ramirez (vocals/guitar and drums, respectively), McKenna Petty (bass), and Katie Henderson (lead guitar/vocals) – did their part to proudly wave the flag with their PRIDESTREAM, a June 15 event that saw them share their personal coming out stories in between intimate performances from the legendary Conway Recording Studios in Los Angeles.

The final weekend of June will see parades and festivals worldwide – Paris, Milan, and New York City will hold their pride parades, to name a few. While millions will flood the streets in unabashed joy, there will be millions more who will watch from a distance. For those who can’t join in this year’s festivities, The Aces have a message for them, too. “Our hearts are with you, and just know that the day is coming where you will be able to publicly celebrate, but until then, please don’t forget to be so proud of yourself for how far you’ve come,” Cristal tells HollywoodLife.

2021 has been a busy time for the band. The Aces released some bonus tracks to Under My Influence, the album they put out in 2020. “These songs were some of the first we wrote…and although they didn’t end up on the initial body of work, we still felt like they were an important part of the story,” says Cristal over email. During the EXCLUSIVE interview with HL, she shared how the “Sleepy Eyes” video came about, the biggest lesson the band took from the 2020 pandemic, Utah’s best-kept secret, and more. Don’t forget to check out The Aces when they go on tour (details here) this November.

HollywoodLife: How do you plan to celebrate Pride this year?

With COVID canceling events last year, did your perspective change on Pride? Did it shift to “Wow, this really means something to me now that it’s gone,” or did you reach a sense of “Pride exists without parades and parties?”

Honestly, it was a bit of both! There was a strong initial sadness when we knew we couldn’t experience pride in the traditional fashion (parties, etc.) But once that wore off, we found really fun ways to celebrate how we could. It was a good reminder that underneath all the parties and events, it’s important to remember the reason we celebrate. It’s so much more than going out, it’s about celebrating those who came before us and paved the way for us to be able to be out and proud. Specifically, the incredible Black trans women who led the movement.

What would you say to the person celebrating his/her/their first Pride this year? Or those who wish they could be celebrating?

Ahhhhh to those who are celebrating: soak. it. UP. There is truly nothing like the feeling of living in your truth and being surrounded by people who not only accept you but CELEBRATE you. Just have a fuckin blast.

To those who aren’t/can’t: our hearts are with you, and just know that the day is coming where you will be able to publicly celebrate, but until then, please don’t forget to be so proud of yourself for how far you’ve come. Treat yourself, spoil yourself, show yourself a lot of love, and celebrate how incredible you are! There will be a day when you are at your first pride, hang in there.

You recently shared some bonus tracks to your 2020 album, Under My Influence. Was this as a special thanks to your fans? Or did you feel like, “Damnit, these tracks are too good to keep to ourselves?”

It was a bit of both, to be honest! These songs were some of the first we wrote in pursuit of Under My Influence, and although they didn’t end up on the initial body of work, we still felt like they were an important part of the story. So we wanted to give them their own little moment to shine.

You also shared a video for “Sleepy Eyes.” Who came up with the idea to have your fans (and, from the adorable shots in the video, your fans’ pets) in the video?

It was actually the idea of one of our amazing team members at our label! Her name is Pearl, she’s great, and the video turned out amazing!

Usually, artists collect bonus tracks and B-sides into compilations, and sometimes, they’re better than the A-side. Do you have a favorite B-side from another group/artist (or a deep cut that you think deserves love?)

Always, I stick by the notion that the best track is usually never the single. I distinctly remember listening to Doja Cat’s album when it first came out and hearing “Say So” (which at the time was not a single, just an album cut) and feeling like it was such a no brainer…. I guess TikTok agreed!

Under My Influence was described by you as “a lot more vulnerable” than your debut. That description reminds me of how another band, Pale Waves, just put out a sophomore release, and they say that it’s more true to their sound/perspective than their debut. Did the band just need time to grow into its full form, like a caterpillar into a butterfly? Or was there a catalyst to this “rawer” sound?

I think naturally, as you mature as a person, you also inevitably mature as an artist as well, and the more you get to know yourself, the better you can articulate/portray yourself through your art. That’s still changing every day for us and will also probably be reflected in our future works… there is no real end in sight when it comes to chasing the most authentic version of you because that fluctuates. I think in hindsight, Under My Influence was the most authentic and raw we could possibly be at that time, and When My Heart Felt Volcanic was also that, just earlier in our process.

Definitely, I think there is a very specific example of that shown between “Lost Angeles” and “801.” I think we as a band are prospectively a combination of the two places, we were born and raised in a small town yet have a more similar mindset and lensing more often found amongst people in bigger cities.

What do you think is Utah’s best-kept secret?

What do you think was the biggest lesson you learned in 2020?

“Don’t Freak” is about anxiety-induced panic attacks, a very apt topic considering how anxiety remains prevalent within everyday life. Did you set out to write a song about this experience? Or did it come out a different way, like you thought of the chorus one day and found it too infectious to let go?

It’s funny, because originally this song was called “Don’t Speak,” and it was more love and relationship-focused. There was something missing, and lyrically the song wasn’t connecting for us. One night we were talking about it, and Alisa and I were like, “This is such a great song, but it’s not really telling a story we care to tell right now. How can we make this song mean more?” From there, “Don’t Freak” was born, which is a very personal story commenting on the stigma that still surrounds mental health. It feels more real and important to talk about these things in our music right now.

The song displays your up-tempo, exuberant level of energy. It’s an anxiety pop song with pep. Was that done as a way to destigmatize anxiety, a “not every song about mental illness needs to be dark in tone” direction?

Not necessarily. I think it’s more sarcastic, if anything. The music we tend to make is more driving naturally, but the whole concept of the song is kind of like “oh you have anxiety? You’re panicking? How about you just …don’t?” which when you understand panicking / mental health disorders you know how ridiculous that ask is. The sonics of the song kind of match the sarcasm of the lyrics.