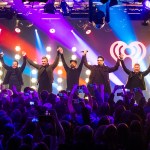 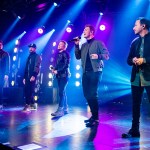 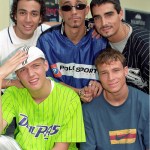 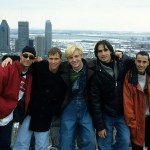 AJ McLean, Lance Bass, and more talked about the excitement of reuniting for the Bingo Under the Stars at The Grove event on June 18 and shared their opinions about a potential ‘boys of summer’ tour together.

Could we be seeing the Backstreet Boys and NSYNC on stage together for a special tour in the near future? It turns out it’s very possible, according to some members of the highly successful music groups.  AJ McLean, Brian Littrell, and Nick Carter, of BSB, and Lance Bass, of NSYNC, all commented on their bond as musicians and friends, and opened up about the potential for a collaboration together, in recent EXCLUSIVE interviews with HollywoodLife.

After reuniting with Joey Fatone for hosting duties and a performance at the Bingo Under the Stars at The Grove event in Los Angeles, CA on June 18, AJ, Lance, and Nick, gushed over being a part of the special night, which was in support of Pride and the LGBTQIA+ community, and revealed their openness about coming together for their fans after there’s been so many false rumors about a “rivalry” between them over the years.

“Back in the day, before there was social media, obviously press and media pitted us against each other when there really was no rivalry at all,” AJ said about the comradery between Backstreet Boys and NSYNC at the event. “Joey and I used to hang out together. We lived right down the street from one another. We have game nights. We’ve been hanging out. I’ve been to his wedding. We’re family! There is no rivalry. And tonight is definitely squashing any rumors that have been.”

“We’re in such a divided world right now so it’s nice to see two very public ‘enemies’ come together and show the world that we can all get along,” Lance added.
“That’s kind of the whole idea,” Nick agreed. “If you guys were a fly on the wall to see what it’s like when we were at Lance’s house practicing and doing choreography. The chemistry is unlike anything else that you could ever explain. I’ve known Joey and all of these guys for a really long time and just singing.”
“Even when I was talking to Lance, he really hasn’t performed or sang anything in a really long time and then we just started focusing on the harmonies of the two songs, the two biggest hits of ours and all of these things coming together,” he added about preparing for their performance that night. “It was so much fun. You could just really see the joy on our faces just to be entertaining again and just to be back.”
When asked about that possible collaboration, AJ teased he wouldn’t know what to call the group. “I’m not sure how well the name’s going to — We may need to work on the name a little bit. Syncstreet,” he said before Lance cheekily suggested, “NStreet.”
“I will say with the Backstreet Boys, we are working on some stuff this year, doing some music,” Nick said about current future music plans. “I haven’t been able to fully reveal it. You’ll hear about it in a big way very soon and then there’s going to be a very festive event that is attached later on in the year.”
In a separate interview on HollywoodLife’s TVTalk this week, Brian also commented on the potential for a Backstreet Boys and NSYNC tour and even threw out a name for it. “I don’t know. It’s a possibility,” he said during the video interview. “We’ve actually thrown around the idea. I think the fans, their fans are our fans, our fans are their fans. Some might be, some aren’t. It doesn’t matter. I think the music business is all coming together closer and closer and why not? We could call it the boys of summer tour and get out there and do some stadiums. I think it would be fun. Why not?”
Whether a tour or some kind of collab happens between two of the most beloved boy music groups out there or not, it’s clear to see that all the guys have an appreciation for each other and are grateful for their past and present, especially when they get to have a reunion on stage like they did on Friday.
“It was surreal,” Nick said about being back on stage with AJ, Lance, and Joey. “It’s like riding a bike, almost. I remember sitting there as we were singing one of the songs and I just had this smile on my face. It brought me back to the late 90s and reminded me of where we came from and I say these guys are the only people who kind of relate to a place in time and we share those same experiences together and so we have those conversations and we talk to each other and we all relate to one another.”
At the Bingo Under the Stars event at The Grove the hosts presented a gift of One Million Dollars in $TKINU Tokens to The Trevor Project on behalf of their involvement with Mission Tsuki.