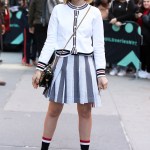 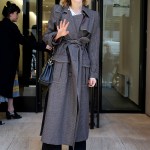 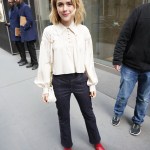 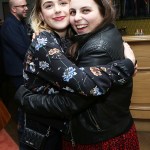 Kiernan Shipka shared new photos of herself looking very similar to Christina Aguilera in her early career as she posed in a mirror while wearing a stylish black crop top, jeans, and sunglasses.

Is that Kiernan Shipka or Christina Aguilera? That’s what the 21-year-old blonde actress had her fans asking after posing in two new Instagram selfies on June 9. In the pics, she donned an outfit that included a black sleeveless crop top and blue jeans, which was very reminiscent of the style the now 40-year-old singer wore when she was on top of the charts in the 1990s.

Kiernan also rocked sunglasses and had her long wavy hair down and parted in the middle, just like the “Genie in a Bottle” crooner. She was holding up her phone while taking the snapshots and flashed a peace sign in one. “won’t stop!” she wrote in the caption.

Once the photos went public on her page, Kiernan’s fans took to the comments section to share their opinions and they all seemed to love the post. “your mirror selfies are getting iconic,” one fan wrote while another called the pics “amazing.” A third wrote, “You’re so awesome” and others left her heart-eyed emojis.

Before Kiernan wowed with her latest photos, she made headlines for rewearing her 2011 Golden Globe Awards dress to celebrate this year’s ceremony. The beauty shared a pic of herself sitting outside in the iconic dark purple velvet choice, which includes an adorable white lace collar, after Mad Men co-star January Jones posted her own pic in her red 2011 Golden Globes dress. “Hey @januaryjones I heard we’re putting on our Golden Globes looks from 10 years ago,” she wrote in the caption of the post, which also included a pic of her and January posing at the 2011 event.

After initially asking Kiernan if she still fit in her dress, which she wore when she was only 11, January then realized the young talent already posted a pic of her wearing it again and was thrilled with it. “Omg I commented before I scrolled. Yaaaasss! I believe this is called upcycling now,” she wrote.