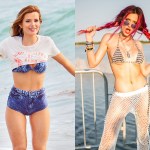 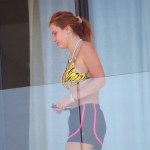 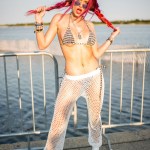 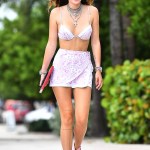 Bella Thorne flaunted her amazing figure in a black and white tie dye bikini, doing a sexy dance while yachting with her fiance Benjamin Mascolo in Miami.

Life’s still a party for Bella Thorne. The 23-year-old actress turned entrepreneur and her fiance Benjamin Mascolo had some fun in the sun on a Thursday afternoon in Miami. The couple went yachting on May 6, and Bella shared her outing at sea with fans via her Instagram stories. She was ready to soak in some of nature’s vitamin D in a tiny black and white tie dye string bikini.

Bella shared an IG stories video where she did a sexy dance to her own song “Shake It,” which she most certainly did. Bella grooved around so that every angle of her killer body in the tiny swimsuit was visible. The thong bottoms featured ties on both hips and a classic triangle top tied around her back and neck. Bella wore her bright orange hair pulled up atop her head so that her fabulous figure was totally on display.

The former Disney starlet shared several photos drinking a beverage out of a bright pink solo cup. She shouted out her friend Sarah Singley in one video, holding the cup up to her mouth and writing how she “got me in the game” with the drink. Oddly enough, Bella didn’t share any loved up photos with Benjamin to the ‘gram, preferring to keep the focus on herself.

The happy couple arrived to the dock together holding hands and looking very much in love. Bella wore a pair of white shorts over her thong bikini bottoms, and rocked Chanel slide-on sandals. Benjamin, 27, went shirtless as the Italian singer showed off his collection of tattoos, including two full arm sleeves. He donned a pair of black Nike trunks and classic black and white checkered Vans slip-ons for the boating trip. Benjamin carried a very large black over the shoulder bag which obscured his chest in paparazzi photos.

The couple got engaged in March after over a year of dating. Benjamin broke the news via an Instagram post showing Bella wearing a massive pear-shaped diamond on her ring finger. While she opened her mouth and stuck her tongue out in the photo, Benjamin smiled proudly as he held her hand up to show off the bauble he gave her. He wrote, “She said YES” in the caption, while Bella called the singer “My forever” in the comments. The pair didn’t waste any time in celebrating, as they threw a lavish engagement party at Los Angeles’ No Vacancy on Saturday Apr. 24, where Bella wore a gorgeous red gown with a hip-high slit.