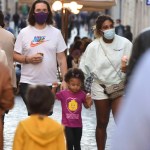 Serena Williams and her adorable three-year-old daughter, Olympia, looked so cute in their matching pink Nike one-piece swimsuits in a new video clip that the tennis great shared on Instagram!

Serena Williams has been hard at work preparing for her next tennis tournament in Rome, Italy, but she took a break from her intense training to hang out with her favorite gal: her three-year-old daughter Olympia! The mother-daughter duo spent May 4 showing off their matching neon pink Nike one-piece swimsuits on the Instagram page of the 23-time Grand Slam champion, 39. In one video clip, captured by Serena’s pal Olivia Griffian, Serena and her baby girl, born Alexis Olympia Ohanian Jr., relaxed in the sunshine on a beach chair.

The beloved athlete looked so at ease, and little Olympia looked like she was having a blast with her favorite doll Qai Qai, who also sported her own little pink Nike swimsuit. The video also featured the song “Cover Me In Sunshine” performed by Pink and her little one, Willow Sage Hart. Serena had the perfect caption for the clip, too. “Covered in sunshine just like a resort,” she wrote alongside the video.

Fans absolutely love seeing Serena and her baby girl bond, and matching their outfits is actually one of the mother-daughter duo’s favorite things to do! Before traveling to Europe, where Serena is currently training, the pair posed for some professional shots where they rocked matching fuchsia swimsuits. Serena’s one-piece featured white writing on it that read, “the shady one,” while Olympia sported the title of “wild child.”

The aforementioned swimsuits looked just like the ones Serena and her daughter wore in September 2019 during a family trip! It’s so clear that, despite Serena’s rigorous schedule, she is making memories that will last a lifetime with her daughter, whom she shares with husband Alexis Ohanian, 38. Of course, Serena’s time in Europe with her daughter, husband, and friends isn’t just for fun.

The tennis great is gearing up for the start of her clay court season for tennis at the Mouratoglou Tennis Academy in France. Up first, the mother-of-one will head to Rome, Italy, where she’ll compete in the Italian Open from May 8 – 16. Then, it’s on to Paris! Serena will compete, once again, for a record-tying 24th Grand Slam title at the tournament. From what we’ve seen, there’s no doubt that Olympia will be right there to cheer her fierce mama on!