Tim McGraw is celebrating his 54th birthday with his biggest fan by his side — fellow country star Faith Hill. The 53-year-old singer took to Instagram on May 1 to share a tribute to the “Humble and Kind” singer, posting a throwback photo of the couple. “Happy Birthday to my man, my one and only. I love you,” she captioned the sweet photo, which showed the pair kissing while Faith wrapped her legs around her hubby.

The young couple both rocked blue jeans, with Faith wearing a blue top and her hubby looking very on brand in a black cowboy hate. The country stars fell in love when Faith was hired as an opening act on her future husband’s Spontaneous Combustion tour in 1996. They’re now a family of five and share three daughters: Gracie, 23, Maggie, 22, and Audrey, 19. “We were young and silly and goo-goo-eyed in love,” Tim recently told PEOPLE about meeting, and touring together in their twenties.

The pair wed in October 1996, and welcomed their first child soon after. “We have raised very, very independent, vocal young ladies, and I’m very proud of that,” Tim said, adding, “They’re very outspoken in their beliefs and what they believe in. They don’t tolerate injustice for anybody and they speak up about it. I’m really proud of that.” 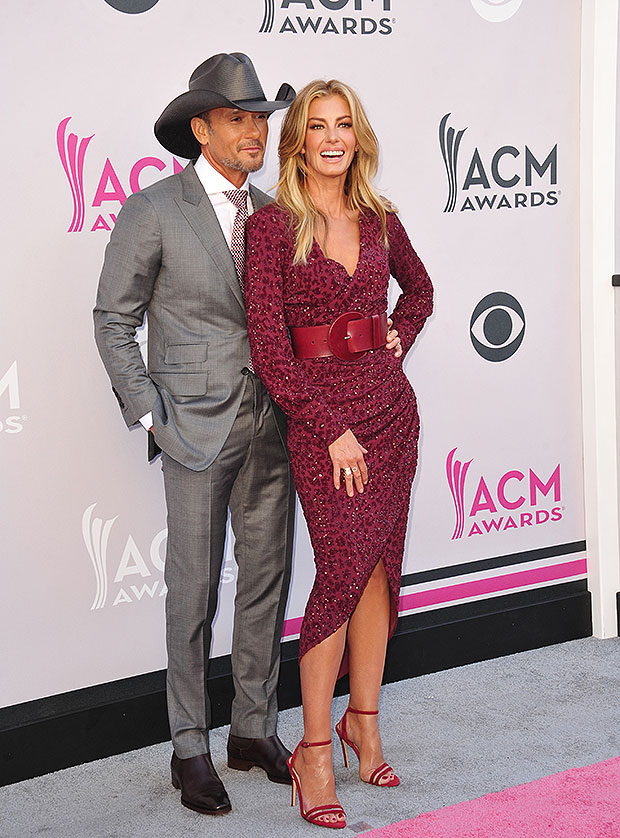 Recently, their eldest daughter Gracie got real on social media about the importance of body positivity and her journey to embracing her true self. She shared some snaps of herself in a bathtub on March 11, accompanied by a thoughtful caption about the meaning behind the revealing photos.

“I’m no artist by any means, but playing with makeup makes me feel like I belong in a museum!” she began her caption. “I love this beautiful era of using the face as just a blank slate. Makeup was created to enhance what men wanted us to enhance, sex, but now it’s used by every kind of person to express themselves.” We love to see it!
Related Link

Related: ‘Yellowstone’ Prequel: Full Cast Of ‘1883’ Revealed & Everything Else You Need To Know