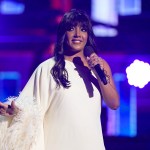 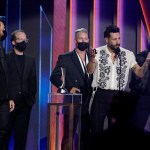 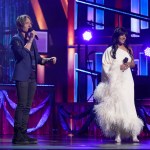 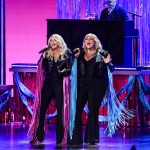 We’re definitely happy now that Carly Pearce has arrived to the ACM Awards! The ’29’ singer looked dazzling ahead of her performance!

Carly Pearce is here, ya’ll! The three-time nominated songstress arrived to the ACM Awards rocking a Monique Lhuiller hot pink, one-shoulder gown with a high slit. Her gown cinched at the hip for some extra ruching and detail. Carly continued with the pink theme by opting for a pink lip and matching silk pink shoes. She is so pretty in pink! She stunned once more in the look when accepting the award for Single Of The Year for “I Hope You’re Happy Now,” with her collaborator Lee Brice.

The singer is due to perform the hit at tonight’s show, which has been a long-awaited moment. Unfortunately at the CMA Awards, Carly’s performance with Lee was nixed after the “Soul” singer contracted COVID-19. Now, they will unite at the ACM Awards for a performance Carly told ET is “flashy” and “full circle.” “I’ve been in a lot of black and white, you know, in all my social media. So, I feel like it’s time for some boldness,” she said. “A little color in my life. So I’ll say there’s color, and then my performance is very…flashy.” And flashy it was! The songstress wore a sparkling mini gold dress by Aler Sundi for the performance that had sparkling fringes throughout and cut out sleeves.

The Best Female Artist nominee continued, “It’s so full circle for me because these are just my stories and now they’re a part of country music history. They’re nominated in these big categories and I think it’s just a really amazing thing to say, ‘Wow, the things I have to say matter and they matter in the genre that I love the most.'”

Carly released her most personal project to date, 29, earlier this year, and spoke to HollywoodLife, exclusively, about the vulnerable record that details the tragic loss of her product and her divorce. “Everybody has different approaches to their artistry, and for me, I feel like if I did not share my truth that fans wouldn’t have believed me. I feel like, in a lot of ways, this was kind of my artistic expression to get out what has happened to me in the last little bit,” she explained. “It’s closing a chapter of the in-between, gap situation.”