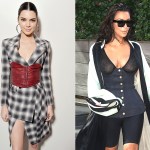 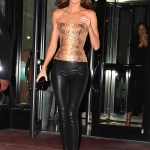 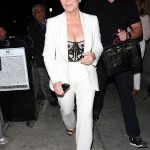 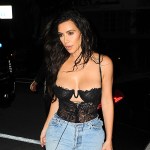 Great minds think alike! Kylie Jenner posted a hilarious video poking fun at Kim Kardashian for showing up to her house in the same thing she was already wearing: a sexy red leather corset.

Yes, they are 17 years apart in age, but Kim Kardashian and Kylie Jenner are also totally twins. The look-alike sisters met up at Kylie’s house before hitting the town on April 15 and discovered something hilarious. They were wearing the same outfit! While they styled slightly differently, Kylie and Kim were still rocking identical red  python corsets.

“This actually wasn’t planned,” Kylie swore in a video taken from her massive closet. “I was just getting ready and my sister wanted to show up in the same outfit,” she joked as Kim shouted “twins!” Kim paired the Dolce and Gabbana corset with slouchy black leather pants that showed off her tiny waist and accessorized with a sparkly crucifix.

Kylie opted to take the black lace bra out of her D&G corset and paired the top with a black leather mini skirt. The ladies even opted for the same look when it came to their hair and makeup: long, dark locks parted down the middle, a nude lip, and neutral eyeshadow. It’s unclear where Kylie and Kim were headed, but sister Kendall Jenner tagged Kylie in a photo of a group knocking back tequila shots the same night.

Over the years, Kylie has practically morphed into Kim. Fans first started noticing the sisters’ similarities when they posed together for a KKW x Kylie Cosmetics campaign in 2017. Kim and Kylie stood back to back in their video, both rocking long, dark hair and bronzy makeup. You could barely tell them apart. Now, they’ve only started to look more alike (and apparently that includes their clothes, now).

They’re even fond of the same bikinis. Kim and Kylie looked identical while hanging by the pool at their Palm Springs vacation home in early April. Kylie shared a photo of herself and Kim sleeping in lounge chairs while wearing string bikinis, and in the same pose. Who’s who?