Fans are loving Young Rock on NBC, which takes a look back at the wild upbringing of the beloved Dwayne ‘The Rock’ Johnson! The show stars Taj Cross as the right-hand man of a young Rock during his teenage years. Alongside Bradley Constant as the future star, Taj taps into the role of “a mix” of multiple influential friends Dwayne Johnson had during that period in his life. “Gabe isn’t based off of one friend in particular. He is basically a bunch of Dwayne’s best friends mixed into one,” the 16-year-old explained in an EXCLUSIVE interview with HollywoodLife. “I never got to speak to him personally, but Bradley asked a bunch of questions and reported back to me on that. So, to bring Gabe to life, I had to really think of making this connection with The Rock myself.” 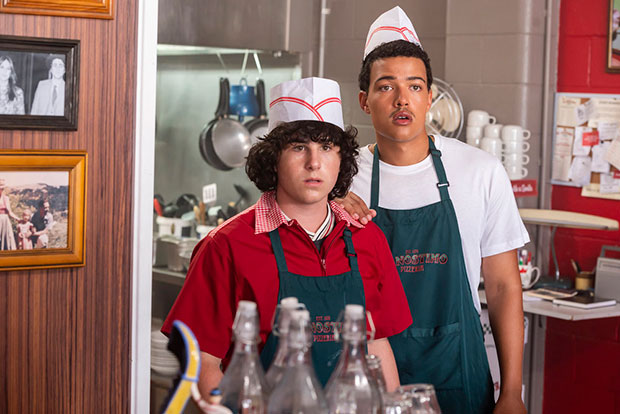 Taj continued to reveal his friendship with Bradley helped solidify the young Rock and Gabe’s on-screen camaraderie. “We were staying at the same hotel while filming in Australia, so whenever we would come back to the hotel, we would meet up and get to know each other and create that banter-y friend chemistry,” he explained. “We would make character decisions together, we would run our scenes, and it was a great opportunity we had to dive into that relationship.”

The time period in which both Bradley and Taj play their roles is the ’80s, and the wardrobe, hair and make up certainly give it away! “They cut my hair, they gave me a bunch of acid-colored, AV Nation clothes that really put me into that time, for sure,” Taj dished.

Young Rock is on NBC every Tuesday night at 8 PM ET! Be sure to tune in!