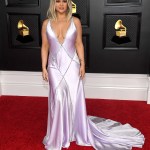 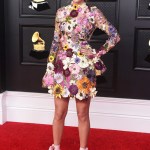 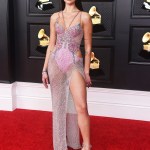 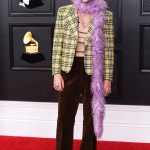 Beyonce stepped out in a stunning second look after her big night at the  Grammys, rocking a silver gown, veil, and turban!

Beyonce‘s incredible night at the Grammy Awards didn’t end when the credits rolled. Queen Bey, husband Jay Z, and Kelly Rowland kept the party going all night when they stepped out for a celebratory dinner in Santa Monica following the March 14 awards show. Of course, Beyonce looked exceptionally beautiful for the dinner, rocking an incredible head to toe sequined outfit.

Yes, literally head to toe! Bey looked like a futuristic goddess in a completely sequined and sheer silver floor-length gown that cinched at the waist with dripping crystals. She paired the stunning dress with a matching sequined turban and delicate veil covering her face. While around other people, she added a protective face mask to the ensemble.

It was just the second killer ensemble Beyonce wore on Grammys night. Bey and Jay made a surprise appearance at the awards show after previously turning down an offer to perform. There, Beyonce covered up for the outdoors event with chic sunglasses and her protective mask, while rocking an ’80s-inspired leather mini dress, black pantyhose, and opera-length gloves studded with gold fingernails.

It’s a good thing she decided to attend the show, because she wound up walking away with FOUR awards and making Grammys history! Beyonce has now won a whopping 28 Grammy Awards, making her the most decorated female artist of all time. Additionally, she is the singer — male or female — with the most Grammys. She gave a touching speech while accepting the award for Best Rap Performance with Megan Thee Stallion (for the “Savage” remix) and again for Best R&B Performance.

Beyonce, who won for “Black Parade,” teared up during her acceptance speech: “As an artist, I believe it’s my job and all of our jobs to reflect the times,” she said. “And it’s been such a difficult time. And so, I want to uplift, encourage, and celebrate all the beautiful Black queens and kings that continue to inspire me and inspire the whole world.” She also gave a shoutout to her nine-year-old daughter, Blue Ivy Carter, who won a Grammy of her own at the 2021 show for “Brown Skin Girl”!