Demi Moore is still such a stunner at age 58. The actress shared with fans how flawless is her makeup-free face is in a Mar. 1 Instagram photo, where she posted a selfie while laying down next to her dog Merple. The pup made a nest in her long, brunette locks, as Demi rocked a pair of glasses while looking at the camera. Her skin is still is amazingly wrinkle-free, and proved that the exaggerated cheekbones she had while opening Fendi ‘s Paris Fashion Week show on Jan. 27 were just thanks to heavy makeup contouring.

Demi captioned the photo, “Monday hair by Merple.” She included a boomerang video of her opening her mouth to let out a scream, as the doggie pulled on her hair after seeming to get stuck in her tresses. Demi could be seen wearing what looked to be a light grey pajama top as she laid comfortably in bed.

The Charlie’s Angels: Full Throttle star had fans worried when stills from the Fendi Spring/Summer 2021 haute couture show were released. The event did not host an audience due to COVID-19 precautions and dropped via a pre-taped video. The photos showed Demi looking nothing like her usual self, as her cheekbone lines appeared lower on her face and going in towards her mouth. Fans wondered at the time whether or not she’d had a cosmetic procedure go wrong, or if her makeup contouring from the show gave her face such an unusual look. 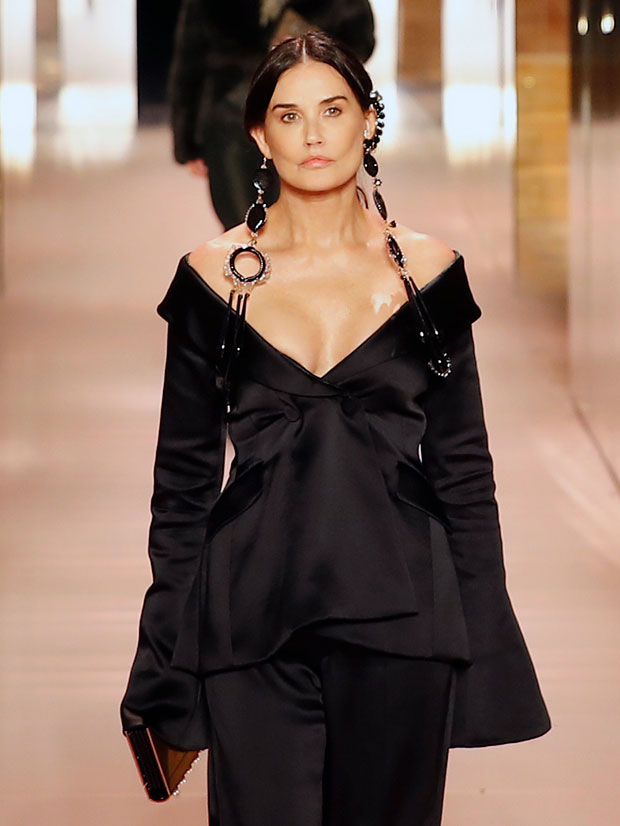 Demi Moore’s exaggerated cheekbones while walking in the Fendi Paris Fashion Week show in Jan. 2021 had fans confused about if the look was permanent. Photo credit: AP.

In her post today, as well as a Feb. 25 IG photo of her doing some spring cleaning, Demi showed that her famous visage looks the same as always — incredibly gorgeous and youthful! Other than the face controversy, walking in the Fendi show as the opening model was a dream come true for the actress!

“Truly, it didn’t hit me until afterwards,” Demi admitted to Naomi Campbell on her YouTube show No Filter. “It really was a teenage fantasy fulfilled. I took a moment where I thought….oh my God. I literally just walked a runway with some of the biggest models ever. I literally felt like a little kid.” Other models in the Fendi show included huge names as Naomi, Kate Moss, Bella Hadid and Cara Delevingne.

Demi looked so stunning in a design by Fendi’s creative director Kim Jones, wearing a flowing off-the-shoulder black pantsuit. “It was very powerful,” she explained. ‘”It felt special for me because it felt less that it was entirely about the clothes and more that it was about the full story. It felt very magical and moving. It was extremely memorable.” In the Feb. 2 interview with Naomi, Demi again showed off her natural, beautiful face, and proved that her cheekbones looked nothing like they did on the catwalk.