When Tom Brady and the Tampa Bay Buccaneers take on Patrick Mahomes and the Kansas City Chiefs in Super Bowl LV on Sunday (Feb. 7), Tiki Barber and Ronde Barber will be backing the Bucs – but it’s not because of the obvious reason. Yes, Ronde played for the Bucs for sixteen seasons and helped the team win Super Bowl XXXVII, but as Tiki tells HollywoodLife in an EXCLUSIVE interview, their support goes beyond that. “The Bucs’ head coach, Bruce Arians, was roommates with my father [NFL running back James “J.B.” Barber] at Virginia Tech back in the early seventies,” says Tiki while promoting his upcoming pre-game show on the Tsū social media platform. “And so, Ronde and I have known Bruce our whole lives and got to really know him really well the last 15 or so years. He’s like family to us. So as much as I try to be objective, it’s hard not to root for the Tampa Bay Buccaneers.”

So, expect Tiki to proudly show his support for Tampa Bay during the Tsū pre-game show. Tiki, Ronde, and a slew of celebrity hosts – Montel Williams, Tino Martinez, Erik Kuselias, JP Peterson, just to name a few – will be on hand to provide an alternative pre-game show for the fans that are focused less on stats and more on the spectacle. “What we’re going to do on Super Bowl Sunday is have a live pregame show starting at 1 o’clock,” says Tiki. “And it’s right on the app, and it’s going to be some X’s and O’s, but it’s really going to be fans having fun.”

“We’ll talk about tailgating and what cocktails we’re going to have, what the game’s going to look like,” says Tiki. “And it’ll be a lot of fun as opposed to, let’s just pop up the [stats about] Tom Brady and Patrick Mahomes. So we’re looking forward to it.” Tiki promises a pre-game show that’s more “conversational” in tone. “It’s a looser conversation, as opposed to, ‘on third down the Buccaneers typically run XYZ type of play,’ if you see what I’m getting at.”

In some circles, the term “casual fan” is a terrible insult, but Tiki thinks that “causal is the perfect [term] of the fans we’re trying to target. Those that obviously want to watch the game but are not necessarily worried about this is Tom Brady’s tenth Super Bowl and he’s trying to get his seventh win. And Pat Mahomes, I forget how old he was when Tom had his first bowl, like eight. Mahomes was eight when Tom Brady won his first Super Bowl, or whatever it may be. Those are the details for the uber fan, but for the fan that just loves the spectacle of big events like the Super Bowl, that’s the kind of pregame show we’re trying to put on.”

When asked if fans could expect some playful brotherly ribbing during the pre-game show, Tiki laughed. “Here’s the problem. This is the friction point with me and my twin. He’ll always say I was the more popular, but less successful of the twins — because we’re identical twins — and as much as I want to combat him on that, it’s hard to.”

“I played New York and obviously, the stage was bigger in New York than it was in Tampa,” said Tiki, who notched his place in football history while as a running back for the New York Giants. Ronde, on the other hand, was a corner/safety for the Tampa Bay Buccaneers and won a Super bowl (Super Bowl XXXVIII) while Tiki…didn’t. “So he always has bragging rights over me,” Tiki tells HL. “So it’s a nice debate, even though it can get contentious at times, depending on what he decides to assert that fact.”

Thankfully, Tiki has been working on his skills as a mixologist, so if he needs to wash down any bitterness from some brotherly teasing, he’ll be able to whip up something. During the quarantine, Tiki decided that he would finally figure out how to make the perfect martini. “It’s like, how can I do this differently? I used a different type of vodka. I tried sweet vermouth. That didn’t really work. Is it too dry? How can I accent? So it was all martinis, all vodka for like five months.

However, for Super Bowl LV, Tiki is changing it up. “Maybe because of the weather — It gets so cold up here. Right now we’re, I think we’re literally at two feet of snow right now in New Jersey — I’ve shifted to whiskeys, to bourbon and scotches. And I think for the Super Bowl, my aunt, my mom’s sister’s, favorite drink is a Manhattan. And so I think I’m going to do Manhattans for Super Bowl, which is rye whiskey and sweet vermouth and some bitters. And I might accent it with probably some mint. I think that’s going to be my Super Bowl, my football beverage, simply because of the weather that I’m stuck in right now.” 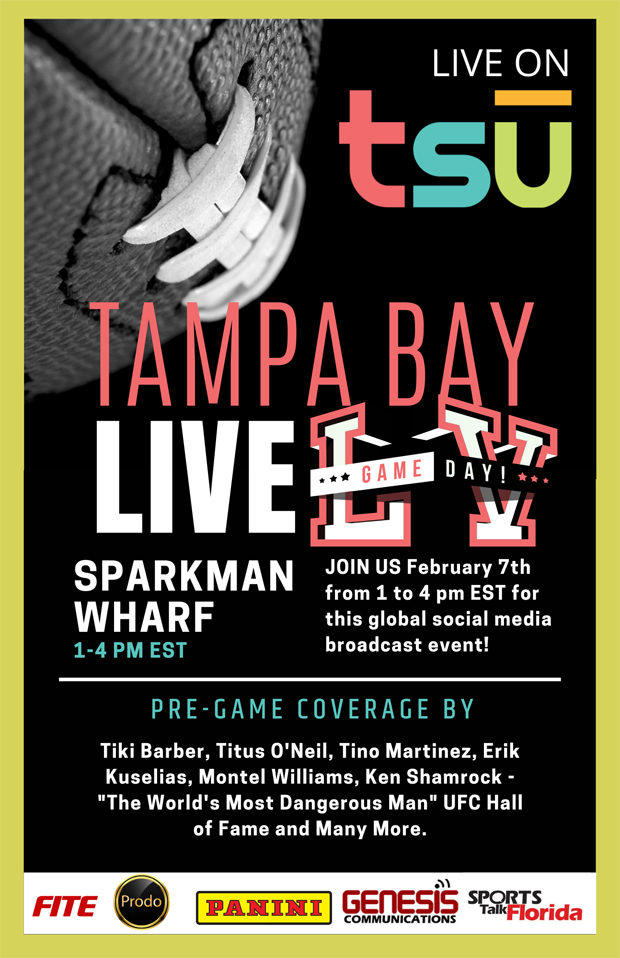 So, if someone were to make a “Tiki Barber” cocktail, it’s best to start with a Manhattan and take it from there (fitting, considering he was part of the Big Blue Wrecking Crew.) As for a drink named after his brother, Tiki has some ideas. “Oh, I mean, Ronde just drinks liquor straight, but if I had to give his affinity and association with rum, I don’t know what, I’d probably make some like coconut, like Malibu type, ‘rum-based-with-an-umbrella-in-it’ cocktail. They can sit in that pirate ship, down in Tampa Bay, Raymond James Stadium. We’ll call it the- I don’t know what we would call it, call it the ‘Jamael.’ That’s his real name.”

Whether you’re drinking “Tikis” or “Jamaels,” be sure to tune into Tsū to watch the pre-game coverage with Tiki, Ronde, and more.