As Kentucky’s Black Attorney General had a message of celebration for the start of Black History Month, Rihanna dragged him over there being no arrests in the police shooting of Breonna Taylor.

Rihanna is still being a voice for the late Breonna Taylor. She was a Black Louisville, KY paramedic who was killed when police opened fire into an apartment, shooting her eight times and killing her in a botched “no knock” raid while looking for a drug suspect who was already in custody. As Feb. 1 began Black History Month in the U.S. the state’s Black Attorney General Daniel Cameron taped a video message about “remembering” the contributions of Black men and women in the state, and RiRi dragged him hard for it. 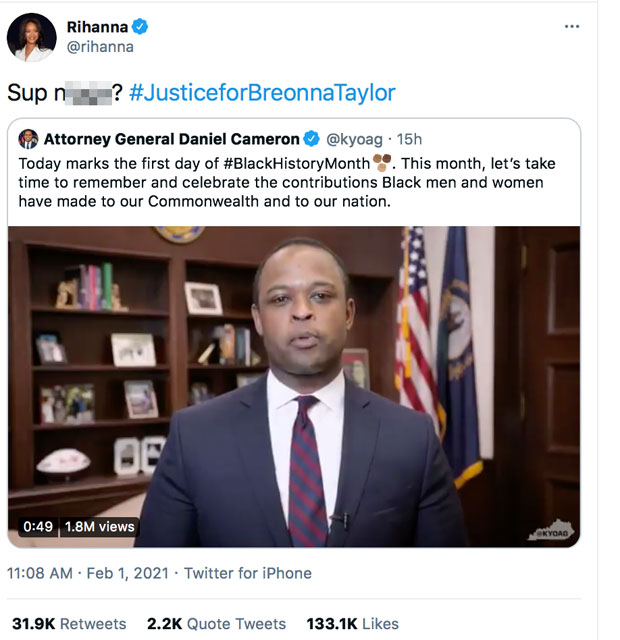 Today marks the first day of #BlackHistoryMonth. This month, let’s take time to remember and celebrate the contributions Black men and women have made to our Commonwealth and to our nation. pic.twitter.com/nmpitBDyAb

Cameron began in a pre-taped Twitter video, “Today marks the first day of #BlackHistoryMonth. This month, let’s take time to remember and celebrate the contributions Black men and women have made to our Commonwealth and to our nation. And the road hasn’t always been easy. Through the course of our country, there are countless examples of Black men and women whose talents, contributions and determination have altered the fabric of our nation and put us on a path toward building a more perfect union.”

Rihanna has a simple message for Cameron, retweeting his video and writing “Sup n***a? #JusticeforBreonnaTaylor” above it. He has been on Ri’s radar since Taylor’s case came to national prominence among the massive Black Lives Matters protests following George Floyd‘s killing while in custody of the Minneapolis Police on May 25, 2020.

On June 26, Rihanna reposted an Instagram message that read, “Over 100 days after #breonnataylor was MURDERED!! Her killers are at home watching Netflix on the couch. WTF is America?!” The Savage X Fenty founder then asked in the caption, “yerrrrr @danieljaycameron , where we at with this my brother?!” tagging Cameron so that he would see it.

In a Sept. 24. 2020 Instagram post, the 32-year-old shared a photo from a rally with a protester holding a sign that read, “A cop shot a black woman and was only charged for the shots missed.” In the caption she wrote, “I’m just gon’ let this sink in to your hollow skull @danielcameron,” naming the AG shortly after a grand jury came back without filing charges against the officers in the case, with the exception of one for “wanton endangerment” as several of his bullets went into a neighbor’s apartment. 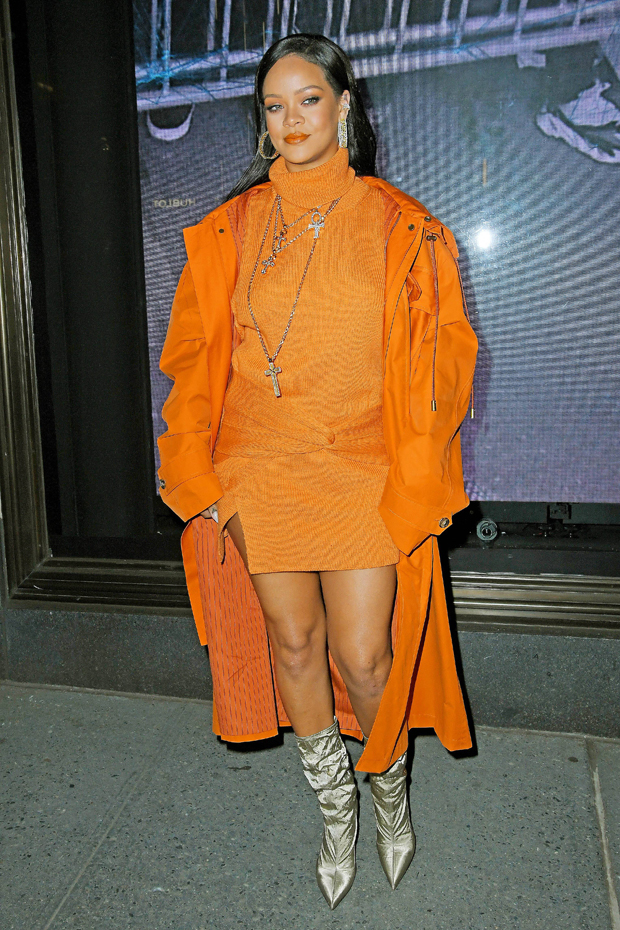 Rihanna has been very vocal about why no murder charges have been brought against the officers involved in the killing of Breonna Taylor inside her apartment in Louisville, KY. Photo credit: MEGA.

To date, the officer who secured the warrant for the March 13 raid on the apartment Taylor was staying in and the officer who fired the shots into the building that killed Breonna have been fired by the Louisville Metro PD, but no murder charges have been brought against the two. Cameron has been criticized by members of his grand jury, who claimed that he didn’t include the charge of homicide as an option for them, as well as the public for his handling of Breonna’s case.

Cameron recommended the charge of “wanton endangerment” against one cop for firing bullets that ended up in neighboring apartments. But he claimed that the other two officers who fired into Taylor’s apartment were “justified in their acts,” as they believed they were confronting a drug suspect in the botched raid. Thus, no murder charges were filed in Breonna’s case. On June 11, 2020 a ban on “no knock warrants” was passed by the Louisville City Council, known as “Breonna’s Law.”