Oscar nominated actress Gabourey Sidibe has revealed that she turned to the eating disorder bulimia as a coping mechanism to deal with her heartbreaking depression. The 33-year-old appeared on Taraji P. Henson‘s Facebook Watch show Peace of Mind with Taraji on Jan. 25, alongside the actress’ best friend and co-host Tracie Jade. Gabourey explained that bulimia isn’t just for “skinny girls” and that it became a “control” mechanism to taper her mental health struggles, rather than just about solely about losing weight.

Taraji began by explaining how she always thought bulimia was a “while girl” problem. “What I found interesting is that if you are suffering with depression and you have low self-esteem, it can cause other disorders like Bulimia. Did you know that 50% of Black girls are more likely to be bulimic than white girls? Did you know that? I literally, it’s ignorant to say, but I thought bulimia was only a white girl plight, I honestly thought that.” Gabi then explained how she came to develop the eating disorder, as it became “the button” to stop her depression and anxiety.

“I did cry a lot in school, elementary, junior high, high school, but when the anxiety started coming full force as I am on my way to college, so like I would have to get to school early so I could really clean myself up, because I would be sweaty, I would be crying, my clothes would genuinely be wet with my tears. And one day I was crying so much and so hard I threw up. I just physically…I threw up, and the second I was done throwing up, my tear ducts dried, I wasn’t sweating anymore, I’d stopped crying and I thought ‘I found the button, this is it.’ I realized that if I throw up it’s going to stop what is going on,” Gabi told the ladies.

“It wasn’t about losing weight, it wasn’t about controlling my appetite, it truly was about how it stopped me from crying, it felt like I was controlling my emotions – I was not, I was out of control. I was getting worse. Being depressed is one thing, if you add an eating disorder to that, that’s a whole other monster that you have to fight,” the former Empire star revealed.

Taraji then asked her former co-star, “What would you say to 8-year-old Gabi who was scared of going outside, anxiety, depressed? What would you say to her today?” Gabourey gave the most heartbreaking answer, replying that, “I probably would really really wrap my arms around her and hug her, because she thinks she hates being touched but it’s just that no one touches her.” 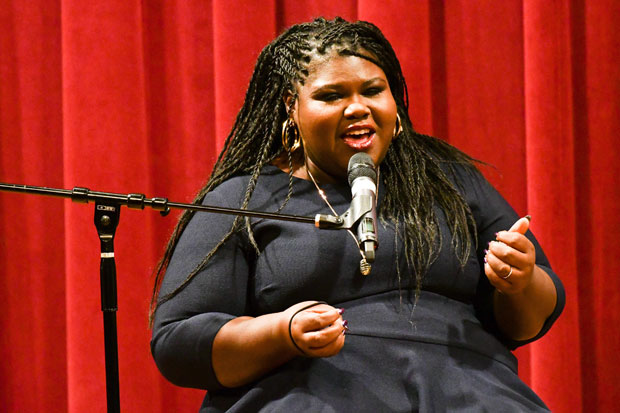 Actress Gabourey Sidibe has opened up about her heartbreaking battle with bulimia. Photo credit: MEGA.

Gabourey the explained that her disorder didn’t have anything to do with her physical appearance. “I also think that bulimia is like, that’s just for skinny girls, like only skinny, skinny people but that’s not true because a lot of the time these eating disorders are not necessarily about weight, it’s not about appearance, a lot of it is about control,” she explained to the hosts.

“The weird thing about getting over an eating disorder is that it is not like crack – you can stop doing crack, it might be tough, but you can stop it and take crack out of your life. But you have to eat to be alive, and so for people with eating disorders, food may never not be a source of trauma. And so, it will never really be gone, but I would love to learn to do that,” she shared.

Fortunately Gabi has a lot to smile about rather than cry these days. She got engaged to her boyfriend Brandon Frankel in Nov. 2020, and and is madly in love with him. When announcing the big news via Instagram, the Precious star called Brandon, “The funniest man I’ve ever met. The sweetest human to exist. @brandontour made up a song for when i put my bonnet on at night. The second I look a bit stressed and overwhelmed, he jumps into action to take over what he can for me. Every moment with him is a joy.”