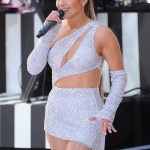 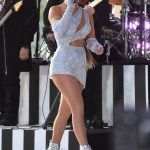 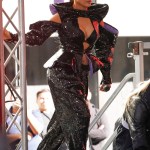 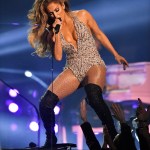 Jennifer Lopez looked better than she did 20 years ago as she stripped down at the beach — just like in the original video!

Jennifer Lopez, 51, just recreated one of her most iconic music video moments ever! Marking the 20th anniversary of her second album J.Lo, the star headed to the beach for an epic rendition of “Love Don’t Cost A Thing.” Rocking the exact same half pony tail, the “In The Morning” singer stunned as she walked on the beach and tossed her designer sunglasses and expensive accessories to the side — just like in the 2001 video directed by Paul Hunter.

“Happy 20th Anniversary to my 2nd album J.Lo!!!! Had a little fun at a recent shoot #Throwback #LoveDontCostAThing,” she wrote in an Instagram bio, teasing that it was part of a new “challenge” on Twitter. “Can’t wait to see your renditions,” she posted for her millions of followers. The short clip began with Jen walking down a beach in a cream trench coat (reminiscent of her Dolce & Gabbana coat in Maid In Manhattan), a J.Lo era merch t-shirt, sunglasses and white jeans.

“Think you gotta keep me iced (You don’t)/Think I’m gonna spend your cash (I won’t)/Even if you were broke/My love don’t cost a thing,” the original song played as she dropped the jacket, a bracelet and sunglasses before turning around to lift her top. In the 2001 video, the-then 31-year-old storms out of a Miami mansion after her boyfriend sends yet another expensive bracelet and bails on plans. In a fit of anger, she heads to the beach to blow off some steam.

Her second husband Cris Judd also make an appearance in the music during a dance break. Although Jennifer has never stated if the song was about a particular person, she was in a relationship with Diddy, 51, at the time of the song’s release. The rapper is also credited as a writer and producer on a number of tracks from the album, including “Walking On Sunshine” and “Dance With Me.”

Jennifer also posted a series of stunning photos from the video shoot, also paying tribute to her career-defining album. “As I reflect on the fact that it’s the #JLo20thAnniversary, I just wanted to say thank you to all of you for being with me, loving me and supporting me through all the ups and downs,” she gushed. “Thank you so much for all the love over the past 20 years!! I love you so much!!”

Several of her followers, including  Mariah Carey‘s ex-husband Tommy Mottola, left some love in the comments. The record producer and label exec posted fire, clapping and a heart emoji on the video. According to Mariah’s memoir, Tommy played a pivotal role in Mariah’s dislike of Jen when there was a dispute over a “Firecracker” sample that later appeared on the Jennifer’s pre-remixed “I’m Real” instead of Mariah’s “Loverboy.” Other fans were simply loving the throwback, writing “Gorgeous” and “this is my favorite music video of yours ever.”