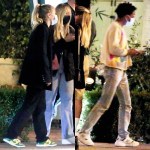 After a series of romantic dinner dates, Sofia Richie and Matthew Morton haven’t been spotted together in weeks. A source tells HL EXCLUSIVELY why their romance has ‘fizzled out.’

Two months after first being spotted on a romantic dinner date, things appear to be over between Sofia Richie and Matthew Morton. Though they haven’t been seen together recently, it doesn’t appear that there’s any bad blood between the model, 22, and the Cha Cha Matcha founder, 27. The casual romance just organically “fizzled out,” a source close to Sofia tells HollywoodLife EXCLUSIVELY, adding that it’s not really a big deal for her.

“Sofia and Matt are still on speaking terms but they haven’t gone on an actual date since [November],” the source dished. “Nothing specific that went wrong. Sofia just really wasn’t ready to get into a relationship and things kind of just fizzled out.” Right now, Sofia’s all about enjoying the “single life” four months after splitting from longtime boyfriend Scott Disick, 37. Sofia and Scott spent three years together, and she’s “perfectly happy doing her own thing” now.

Nicole Richie‘s little sister is also finding “comfort” in spending time with her famous family, says the insider, as well as just having fun with her friends. A second source tells HollywoodLife EXCLUSIVELY that the busy bee also has “a lot on her plate with work and exciting stuff coming up [in 2021]” to take her mind off of guys. “Dating really isn’t high on her list,” they dished. At least Sofia and Matthew seemed to have a blast during their short time together.

After their first date on October 17 in Malibu, the pair headed out on a series of dinner dates in Los Angeles — and shared some major PDA. Sofia and Matthew were photographed kissing deeply while grabbing a meal at Japanese restaurant Matsuhisa in Beverly Hills on November 2. They weren’t shy about showing affection during their rendezvous, which came shortly before Scott was spotted with 19-year-old Amelia Hamlin.

HollywoodLife reached out to Sofia Richie’s rep for comment but did not hear back as of press time.