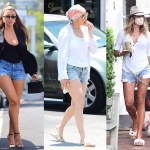 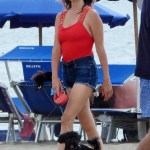 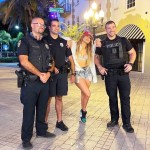 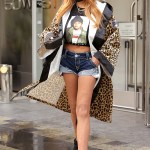 Larsa Pippen continues show off her amazing curves as the internet continues to question her apparent friendship with Malik Beasley. See the model rocking a pair of daisy dukes!

Larsa Pippen is sticking to her usual social media posting, despite backlash over her hand-holding outing with NBA player, Malik Beasley. The former Real Housewives of Miami star, 46, showed off her long legs in a new Instagram photo on Monday. Larsa, who posed on top of an outdoor bar, wore a black bodysuit that was tucked into a pair of daisy duke shorts.

Larsa revealed in her caption that she’s on “cloud 9,” which is interesting seeing as she’s been the butt of relationship jokes on social media. If you’re not up to date on the latest Larsa news, you wouldn’t know that she was photographed holding hands with Minnesota Timberwolves player, Malik Beasley, on November 23. They were first spotted hand-in-hand while shopping at a mall in Miami. At first, it was unclear who Larsa’s mystery man was, until he was later identified as 24-year-old Beasley.

What really threw fans for a loop is the (major) fact that Beasley is a married man. The athlete is married to former pageant winner, Montana Yao, 23, and the two share a young son named Makai. Yao appeared to address the photos of her husband and Larsa in a troubling post on Instagram.
“Wow, I don’t even know this man…this is wild y’all…I’m seeing it for the first time just like y’all,” Yao wrote on December 1. In a separate story, she added, “Appreciate all the love y’all, for real,” along with prayer hands and a red heart emoji.
While Larsa hasn’t directly addressed or clarified the photos with Beasley, she has been sharing cryptic quotes on social media. More recently, the former Kardashian confidant shared this message to her Instagram Stories on December 7: “Maybe spend more time loving and less hating It’s not chasing my life but it might change yours.” — Larsa’s call for kindness still hasn’t stopped the internet from buzzing about her outing with Beasley. For his part, the NBA player has remained radio silent.
Meanwhile, Larsa is still legally married to her estranged husband, Scottie Pippen. The couple separated in 2015, and Scottie filed for divorce after accusing Larsa of having an affair. They later reconciled, but Larsa ultimately filed for divorce again in 2018. However, it still hasn’t been finalized, and the pair remains estranged.