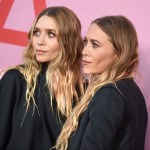 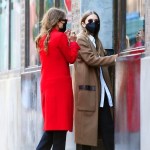 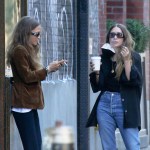 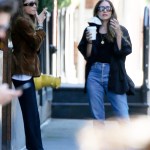 Mary-Kate and Ashley Olsen, who very rarely venture out together in public, were pictured dining at a hotel in New York City on Dec. 2. The twins had last been spotted together in July.

Mary-Kate and Ashley Olsen, 34, reminded us of the good old days when they’d twin in countless films during a dinner outing in New York City on Dec. 2. The famous twins coordinated in cozy, all-black outfits for the rare public appearance, which Ashley also wore a beanie for. Mary-Kate and Ashley were seated at an outdoor table while eating at one of the Mark Hotel’s restaurants. The Olsen twins were last spotted together while leaving their company building this past July.

Despite running a fashion empire called The Row together, the twins rarely step out together due to their private nature — so, this was a very rare sighting. They’ve only participated in a handful of interviews on television since the Full House stars retired from acting (their last film together was the 2004 feature, New York Minute). However, the duo did participate in a panel discussion about their jewelry brand, Elizabeth and James, with Kohl’s CEO Michelle Gass in Nov. 2019.

Mary-Kate and Ashley’s most recent public sighting comes amid Mary-Kate’s divorce drama with French banker Pierre Olivier-Sarkoz, 51, whom she requested an emergency divorce from in April of 2020, while the New York courts were closed. At the time, Mary-Kate claimed that her application was “an emergency” because the fashion designer’s husband allegedly wanted her to move out of their home in mid-May. “I am petrified that my husband is trying to deprive me of the home that we have lived in and if he is successful, I will not only lose my home but I risk losing my personal property as well,” Mary-Kate had written in an affidavit obtained by PEOPLE.

That filing was denied since it “did not follow the essential matter procedure” amid the coronavirus pandemic, which New York courts spokesperson Lucian Chalfen told E! News. This led Mary-Kate to reportedly file for divorce again in May. Later, Mary-Kate and Ashley went on to ring in their 34th birthdays in June — HollywoodLife even rounded up their most iconic style moments together to celebrate!