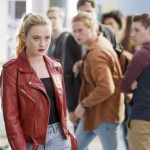 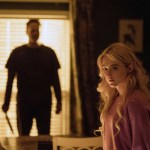 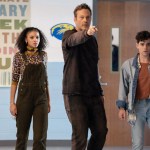 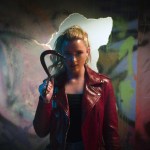 ‘Freaky’ shows us a side of Kathryn Newton we’ve never seen before. HL spoke EXCLUSIVELY with the actress about playing a serial killer, swapping bodies with Vince Vaughn, and smashing horror tropes.

Things get a little freaky in Freaky. While you would think Vince Vaughn’s formidable Blissfield Butcher would be the main source of scares in the new film, it’s actually Kathryn Newton’s Millie. Butcher and Millie end up swapping bodies, making the teenage Millie a dangerous serial killer.

HollywoodLife talked EXCLUSIVELY with Kathryn about seamlessly transforming into the role of a serial killer. She opened up about channeling her killer “instinct” in order to play the murderous Millie. She also spoke about what she learned from Vince and why the ending is so important.

You’ve had some great roles over the past couple of years with The Society, Big Little Lies, and more. What drew you to Millie and in a sense the Butcher, too?
Kathryn Newton: I was very excited about reuniting with Chris Landon and Jason Blum as well. When I read the scripts the first time, I knew I had to do this. I have to play this character because I really wanted to transform into a serial killer. Even though I had no idea what to do or really just believe I could, having Chris Landon tell me that I had a little bit of a killer in me made me feel confident. Millie’s kind of just like me. I think I’m totally a grandma, and I was a nerd in high school. I definitely didn’t have a lot of friends, and I really related to her because, at the heart of this movie, it’s about a girl who doesn’t know who she is. It takes becoming someone else to see her own power. I think we all do that. We all grow up and have that moment where we realize we’re actually pretty awesome. Me looking back at pictures of myself in eighth grade I’m like, what were you thinking? But I still am that person. I’m still weird. I still don’t fit in, and I love it.

When you found out you were going to be switching places with Vince Vaughn, what was your immediate reaction?
Kathryn Newton: I was so excited. You have no idea.  I’m such a fan of Vince, so to get the opportunity to work with someone you are such a fan of was enough to make me jump up and down and scream. But then I got to set and the first time I met him, we were doing dance rehearsals. He was just like “hail, hail, Blissfield High,” and he was just going for it. I knew this was going to be so much fun. He was so open, and he had so many great ideas that he brought to our rehearsals with our director, Chris Landon, that I knew that this movie was going to be way better than I thought. I already thought it was going to be great because of the script. Michael Kennedy and Chris wrote this great script that was so fresh and funny. It’s just a reflection of the times that we’re in and real and absolutely absurd. But then Vince just added this amazing energy because he was down to collaborate with all of us. I thought for a while there I was going to have to imitate Vince Vaughn. I thought that’s what I was going to be doing, and then I realized that’s wrong. That’s not what we’re doing at all. We’re creating two characters, and we’re both going to play the same character. So we came up with mannerisms that helped us stay grounded in each role because there’s such a difference in the physicality if you and I were in the same room. We walk differently because we’re two different souls. It was really fun to determine how the Butcher would carry himself and why he carries himself that way. The confidence I felt playing the Butcher, it’s crazy. Millie wasn’t hard for me to play because she was just more like me.

Speaking of playing the Butcher, how did you get into the mindset of a cold-blooded killer? What did you look to for inspiration?
Kathryn Newton: I would look to Vince a lot and ask him, “What do you think of this? What do you think of this choice?” And he’d be like, “I think you should try that.” You know what I mean? To have someone have your back like that made me feel like I could do anything. Chris Landon, our director, I looked at him and he knew what he wanted. He’s the king of horror, but he’s so sweet. If you get to talk to him, he’s the sweetest person, but he’s clearly a mad genius and insane in the head because this movie is crazy. He comes up with all these horrific things in it. To answer your question, the truth is, you just play the reality. You have to go there and believe you’re a killer. People are asking me about my stare. How do I keep my eyes open? I didn’t even know that I really was doing that. There’s like an instinct. If you’re really trying to kill somebody, I don’t think you do much. You’re really specific with what you do and the choices that you make because you’re trying to kill someone.

There are so many kills in this movie. Was there one that really stood out to you that was like the most fun for you to be a part of?
Kathryn Newton: There are so many iconic kills in this movie. It’s like an ode to so many horror films. My favorite weapon was definitely my chainsaw. I loved the chainsaw scene because it was just the most intense and I felt the most powerful carrying around a chainsaw. Being covered in blood really intimidated everybody, and I had a lot of fun with that. I also just love using the butcher knife. I feel like it’s such an iconic weapon in horror films.

Vince is such a comedy legend. Was there anything that you learned from just watching him on set?
Kathryn Newton: I learned so much from him. I learned that you can take risks, and you’re not going to fail because everyone in the scene and everyone on set just wants you to do good. Everybody wants to make the best movie, so I learned that I can really fly if you want to. I feel like my best scenes were with him and Misha [Osherovich] and Celeste [O’Connor] because I got to improvise with all of them. When you’re in the moment and something’s funny, you can feel that energy on set. You have to run with it and just go for it. Chris Landon knew what kind of movie he wanted to make, so that really gave us permission to find new things.

I love that this movie sort of flips the whole “final girl” trope, which is very popular and we all love it, on its head a little bit. Was that exciting for you as an actress to do something a little bit different in the horror genre?
Kathryn Newton: I love the final girl and the scream queens. They’re so iconic, and they’re part of the horror genre that I love so much. You know, the girl going into the house and the audience is screaming to not go into the house. Those are the things I love about her. This film does stump that trope, but it’s still a callback to the iconic final girls that we’ve seen and loved. But it changes everything. This movie is never anything that you think it’s going to be, and by the end of it, she’s her own hero. But it literally takes becoming someone else to think that she can be, so I love how surprising this movie is. It’s definitely not anything I’ve seen before, and I grew up on those movies. I grew up on Freaky Friday and The Hot Chick. I had those on DVD. They’re just so much of who I am. I think it was just who I was at that time. I think Freaky is who I am at this time in my life. We’re in 2020, this is how people talk. It’s just truthfully who we are. Like, Misha has the most iconic taglines. Once again, destroying the cliches that you’ve seen in horror films. We’re laughing along with it, and we’re along for this ride because it’s just more real. They’re not pushing it at all. They’re calling it out and making it more grounded and believable.

The Butcher comes back to kill Millie at the end, but she fights back. I loved how that scene wasn’t just Millie. It was very much a team effort with her mother and sister. How did you feel about changing up the final girl situation and having it be such an empowering moment for the Kessler women?
Kathryn Newton: Freaky is all about taking tropes and cliches and stereotypes and just crushing them. It definitely does that to the final girl. I think the ending of the movie is crushing that trope, and it’s really refreshing to see it happen. For me personally, it was the most iconic line I’ve ever gotten to say in a movie, so I was very excited about the ending.