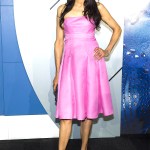 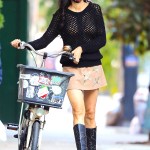 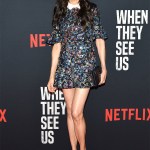 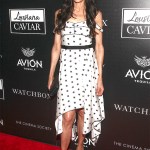 Famke Janssen hit the pavement and strut her stuff in a camel-hued mini skirt and fierce boots during a beautiful autumn day in NYC! Check out the ‘X-Men’ star looking fierce and fab at 55!

Famke Janssen looks just like she did when she starred as Jean Grey in 2000’s X-Men! The gorgeous actress, 55, was spotted out and about on October 18 taking in the beautiful fall weather in New York City. Famke sported a camel-hued mini-skirt with three birds embroidered on the fabric, along with a pair of black boots featuring the outlines of birds with intricate beading. As for her shirt, Famke wore a black mesh, knit long sleeve top and wore a celestial face mask and sunglasses as her accessories.

The X-Men alum also appeared to enjoy a ride around the city, guiding her unique bike by her side. The eclectic two-wheeler featured a bin as Famke’s basket, and an intricately patterned seat, too. The actress looked absolutely fierce while getting some fresh air in the Big Apple. It was almost like taking a trip back in time to when the actress starred in the superstar ensemble of X-Men in 2000. 20 years ago, Famke joined stars Hugh Jackman, Halle Berry, and more for the first installment of the X-Men franchise. Famke played Jean Grey, a telekinetic mutant who used her powers to help the X-Men stop evil forces like Magneto from destroying the world. Famke portrayed Jean in subsequent sequels X2 and X-Men: The Last Stand. Much like Famke, Halle Berry, who played Storm in the films, has barely aged since the first film debuted in 2000! In fact, Halle celebrated the film’s anniversary by posting a photo of herself from the premiere, where she rocked a fabulous bikini top in true early aughts style. Both Halle and Famke have remained incredibly active, as seen by Halle’s own fitness Friday videos, and a clip of herself skateboarding in California — almost like the West Coast version of Famke’s recent bike ride!

But along with her clear continued focus on fitness, Famke’s career has also seen a lot of success. After six years of playing Jean Grey, Famke went on to appear in the Taken series as Lenore, alongside actor Liam Neeson. She did, however, reprise her role as Jean in the 2013 film The Wolverine and in the 2014 film X-Men: Days of Future Past. Between 2013-2015, Famke starred in the horror series Hemlock Grove, before appearing in the Viola Davis-led ABC drama How To Get Away With Murder. Famke has clearly been busy since her days manipulating objects as Jean Grey. We cannot wait to see more of her in the future!