Chrissy Teigen has taken to social media for the first time since revealing the heartbreaking loss of her unborn baby boy. She quietly returned to Instagram on October 10, nearly two weeks after she and husband John Legend opened up about their pregnancy loss due to complications. The 34-year-old commented on a post shared by Betches, which featured a Tweet by Kara Morehart, reading, “Just booked an eyebrow waxing appointment and I’m excited I’ll be wearing a mask so I don’t have to hear ‘mustache too?’” 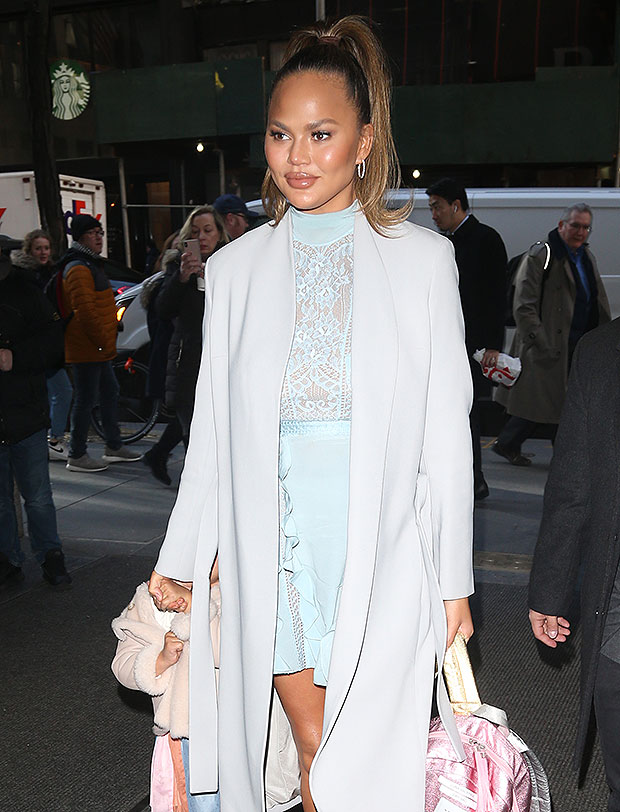 The supermodel commented, “Finally, a giggle. Thank you.” Fans were quick to respond to her comment, with one writing, “We love you so much, Chrissy,” while another follower commented that they were “praying” for her and her family. Chrissy first revealed she and John had lost their baby boy on Sept. 30, after undergoing pregnancy complications for the past several weeks.

“We are shocked and in the kind of deep pain you only hear about, the kind of pain we’ve never felt before. We were never able to stop the bleeding and give our baby the fluids he needed, despite bags and bags of blood transfusions. It just wasn’t enough,” Chrissy wrote in the caption of an Instagram and Twitter photo showing her in tears, while in a prayer position in her hospital bed.

“We never decide on our babies’ names until the last possible moment after they’re born, just before we leave the hospital. But we, for some reason, had started to call this little guy in my belly Jack. So he will always be Jack to us. Jack worked so hard to be a part of our little family, and he will be, forever,” she continued. Fans, and fellow celebs have spoken out in the wake of her heartbreaking revelation to show their support. Others, including Kate Beckinsale, 47, spoke out about similar experiences of losing a child.