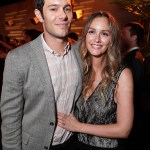 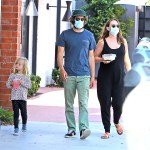 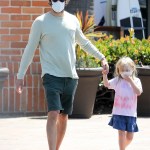 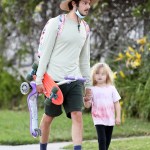 Parenthood can certainly work up an appetite. Weeks after Leighton Meester and Adam Brody welcomed a son, the couple was seen with their daughter, Arlo, grabbing a bite to eat.

Leighton Meester and Adam Brody made time for some bonding with Arlo Day Brody on Tuesday (Oct. 6.) The 34-year-old Gossip Girl actress and Adam, 40, were seen taking their 5-year-old daughter out to lunch in Los Angeles’ Pacific Palisades neighborhood. The outing comes a month after Adam announced that he and Leighton had welcomed a son, and the new mom opted for comfort in a chic, loose-fitting black jumpsuit. The O.C. star kept it casual with some green pants, a t-shirt, a pair of Addidas, and a hat covering his head of bushy hair. Both parents wore facemasks, showing that they’re still being responsible for taking the COVID-19 pandemic seriously.

Seeing Leighton and Adam out and about like this is a rare treat. The couple is notoriously private. The only way the world learned about their second child was via Twitch. Adam appeared on The Fun Time Boys Game Night Spectacular at the start of September and shared that “since the last time I played, I have a new kid. I have a boy, and he’s a dream, a dream boy.” Adam wasn’t forthcoming with any more details beyond that, but considering they’ve kept the pregnancy under wraps, this was to be expected.

The first clue that they were having another kid came in March. It wasn’t so much a clue — more like a flashing red light —  because Leighton was seen with a massive baby bump in March. She was taking her unborn son on a stroll around Los Angeles, right before California issued its’ shelter-in-place order in the wake of the COVID-19 outbreak.

She never really confirmed she was pregnant, even when it was kind of obvious. During an Apr. 15 Instagram Live session with her Single Parents co-star Kimrie Lewis, Leighton said that someone told her that she “got fat. That’s really nice.” Leighton didn’t say why someone might have thought she had put on weight, choosing to let the bump speak for itself.

Leighton and Adam keeping their private life very private is nothing new. The two were married in 2014, one year after meeting on the set of the film Oranges. Since then, they don’t really discuss their marriage. They rarely make public appearances together. The couple was seen at the 2019 premiere of Adam’s film, Ready Or Not, but before then? One would have to go back to the 2017 Golden Globes for another red-carpet pic.