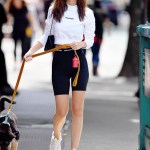 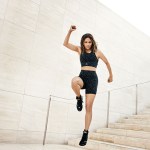 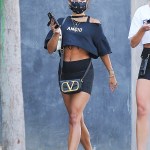 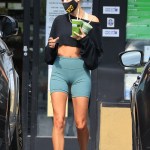 Hailey Baldwin looked model-ready while hitting the gym in the cutest outfit, a crop top and bike shorts combo. The Yeezy sneakers were a nice touch, too!

Hailey Baldwin didn’t let a day of sweating at the gym get in the way of showing off her expert style. The model, 23, showed off an impeccable gym look while strolling into a shop to get a post-workout beet juice: a black, cropped tank top and matching bike shorts, as well as a long cardigan to keep her cozy in the October chill. The outfit perfectly showed off her long and lean legs, along with a hint of her six-pack abs.

Ever careful, she wore a black protective face mask to grab her snack. Hailey was pulling out the big guns during her workout. She posted a glimpse into her session at the celeb-favorite Dogpound Gym in West Hollywood on October 5, which involved throwing ropes and flexing her legs in resistance bands. She accessorized with only the best to maximize her gym session: $439 pair of Yeezy QNTM sneakers in a light blue hue.

She kept her hair out of her face while working up a sweat by pulling it into a tight ballerina bun. Her day out coincided with her issue of Vogue Italia dropping. Hailey appeared on the Helmut Newton-inspired, steamy cover with her husband, Justin Bieber. Inside the issue, she and Justin, 26, explained why they’re not rushing to have kids after celebrating their second wedding anniversary.

“The strange thing is that I’ve always wanted to have children early, but now that I’m married, I feel less of an urge,” Hailey revealed. “I am an ambitious girl with many projects.” Justin echoed her feelings. “We’re still newly married,” he said, adding that they’ve “just been enjoying our time together and getting to know each other deeper.”