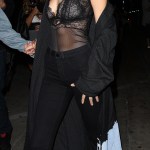 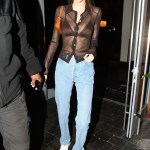 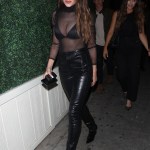 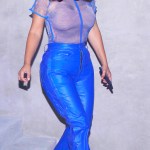 Sheer tops are so perfect for summer, and once again Bella Hadid has worn the look to perfection. She rocked a black sheer number in one of her most revealing outfits yet.

Bella Hadid sure knows how to get attention when stepping out in New York City. The 23-year-old model looked dressed to the sexiest of nines in the outfit that she donned on Aug. 28. Bella wore a tiny sheer bralette top with small shoulder straps and a one inch strip of fabric that wrapped horizontally around her middle of bosom, so that breasts weren’t completely exposed.  But her bare underchest was visible in the tiny top, which had sheer sleeves coming down her arms from just below her shoulders. She’s definitely going to have to be very careful moving around in this top to avoid a wardrobe malfunction.

Bella’s toned tummy was visible through the sheer fabric of the top, which hugged her slim waist. She paired it with classic black menswear-style trousers that sat around her hips, but the side straps of her black underwear were visible above the waistline through the sheer shirt.

The brunette beauty was en route to a pre-MTV VMAs event, as her overall look was total glam. In addition to her head-turning top, Bella wore her hair pulled up and back in a slightly messy updo, with her bangs slicked down one side of her face. The COVID-19 conscious beauty held a black mask up to her face with just her famous green eyes visible. She had on heavy dark liner to go with her smokey eye shadow palette.

Bella was photographed leaving her apartment late in the afternoon in the incredibly sexy outfit. It is MTV VMAs weekend, but due to COVID-19, the usual massive party circuit had to be trimmed down in size due to rules against large gatherings, as well as social distancing. The Aug. 30 event will go off live from multiple outdoor locations across New York City, along with remote and pre-taped performances. But there are still smaller celebrations going on leading up to the awards, and no doubt Bella wants to be part of the mix. That’s why she brought along her protective black face mask.

Bella’s ex The Weeknd is in town, as he just taped his performance for Sunday’s show on Aug. 27. He was photographed leaving a studio in NYC wearing a bright red blazer, as well as a black shirt and tie and matching slacks. The 30-year-old singer was sporting a swollen and broken nose, as well as two black eyes. If he sees Bella in this incredible outfit, it should go a long way towards raising his spirits. After all, the two are still close despite breaking up one year ago. Bella is a super-fan of wearing sheer tops, but so are these other nine celebs and you can see their sexy outfits here.