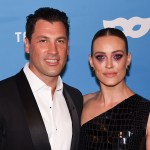 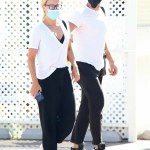 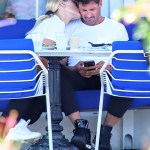 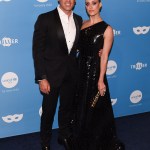 Dancers Maksim Chmerkovskiy and wife Peta Murgatroyd are making the most of their time together before she enters the ‘DWTS’ quarantine. They shared plenty of PDA on a sunny lunch date.

With the pro-partners on Dancing with the Stars needing to undergo COVID-19 quarantines and health precautions ahead of season 29, that means they’re going to be separated from loved ones. Peta Murgatroyd, 34, is returning for her 14th season with the ABC dance competition, but her husband, former DWTS hunk Maksim Chmerkovskiy, 40, is not among this year’s group of pros. The appeared to be getting in plenty of quality one on one time ahead of Peta’s lockdown, putting on a PDA-filled lunch session in Beverly Hills on Aug. 24.

The couple twinned out in matching white t-shirts and black sweatpants. They each wore masks as they walked down the sidewalk to their eating destination, which was in an outdoor setting as is required under California state rules regarding COVID-19. That meant that paparazzi were able to caption Peta giving Maks a passionate kiss on his neck.

Maks was intensely looking down at his phone while getting love from his wife. He held onto her arm protectively as the couple headed to their dining destination. Peta could be seen wearing a necklace that read “Shai,” referring to the couple’s three-year-old son Shai Aleksander Chmerkovskiy, who Peta will no doubt be missing terribly while in quarantine.

Peta as been with DWTS since 2012’s season 13. She has only missed three seasons since, season 23 and 26/27. She won season 22 with her star partner Nyle DiMarco. Longtime show favorite Maks last competed in season 25. He won his first Mirrorball trophy after 13 seasons of competing in season 18, with his celeb partner, ice-dancing Olympic gold medalist Meryl Davis, 33, though he previously made it to the finals with four other partners.

Who Peta’s partner will be is still a mystery to fans. While ABC announced their pro-dancer roster on Aug. 18, the actual star contestants won’t be known until the scheduled season 29 premiere on Monday, Sept. 14 at 8 p.m. ET/PT on ABC. So far former Bachelorette Kailyn Bristowe has confirmed she’s competing, and the Backstreet Boys‘ A.J. McLean is reportedly among this season’s cast of celeb hoofers. The show underwent a major hosting shakeup this summer, as on July 13 the show’s OG host Tom Bergeron, 65, announced that he’d been let go, and his co-host Erin Andrews, 42, confirmed the following day that she’d been cut as well. Shortly thereafter, it was announced that Tyra Banks, 46, would be taking over their DWTS hosting duties.