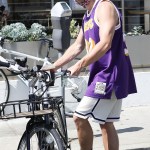 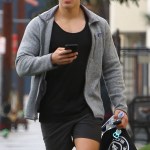 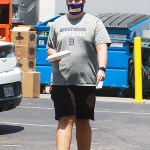 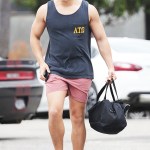 Patrick Schwarzenegger isn’t the only son of Arnold who is known for putting his amazing physique on display.

Hubba hubba indeed. Patrick Schwarzenegger, 26, looks to be in the fittest shape of his life as evidenced by his most recent outing. The model/actor was spotted picking up some iced coffee in Brentwood, California, on Saturday, August 14, where he showed off his bulging arm muscles in just a purple Los Angeles Lakers jersey. He used an E-bike as transportation as opposed to how many of us get around while running errands (a car) which no doubt helped him burn the calories during his sunny day out.

Patrick, just like his legendary father Arnold Schwarzenegger, 73, has an enviable body that is admired by millions. “Patrick’s abs come partially from determination in the gym and partially from great genetics,” Eric Fleishman (aka, Eric the Trainer) told HollywoodLife during an exclusive interview last year while also talking about the interesting ways he keeps him in tiptop shape.  “Anytime I see him eating ice cream on social media, I always send him a FITNESS 911 emergency message. Hopefully, he sees it and drops the spoon.”

He and Arnold have some stiff competition in the family when it comes working out as the iconic action star’s other sons Joseph Baena and Christopher Schwarzenegger have been getting into the fitness game in different ways where the results are paying off and then some.

Joseph (who is the son of Arnold and Mildred Baena) always looks to be in the best of moods whenever he posts a photo or video of him breaking a sweat. He shared a clip of him sans shirt earlier this month where the 22-year-old made lifting heavy weights look like the easiest thing in the world.

Christopher (who is the youngest child of Arnold and his ex-wife Maria Shriver) has done a 180 as of late. The more reclusive one of the family has been seen out looking noticeably slimmer this summer compared to how he appeared a couple of years back.