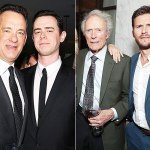 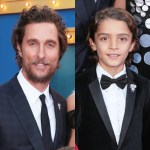 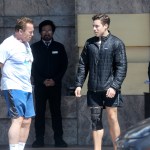 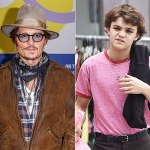 Little Aeko Brown looks just like his dad — the father-son duo even have the same big, brown eyes which can be seen in these adorable new videos.

Chris Brown‘s adorable son Aeko is growing up so quickly! It’s hard to believe the tiny tot is already eight months old, and totally resembles his dad. The bub is quarantined on the other side of the world with his mom Ammika Harris, and the 27-year-old model took to Instagram on August 12 to share an adorable clip of her son. “Test riding his capsule,” she captioned the carousel post, which featured two short videos of Aeko rolling around in a brown leather capsule.

The R&B singer’s mini-me wore a blue bib and a nappy as he smiled sweetly and flashed his huge brown eyes at the camera. Talk about twinning! “He is too cute ..especially those dimples,” one follower commented, while another fan wrote, “He’s got his daddy’s eyes.” Little Aeko is also taking after his dad with a head of curly brown hair!

Last month, we reported that Ammika “would love” for her and her son to reunite with Chris the US, but have decided to wait until it’s safe before hopping on an international flight. A source close to the proud parents talked exclusively with HollywoodLife and explained that although Ammika is allowed to travel to the US, she and Chris are not willing to risk the “well-being” of their newborn amid the global COVID-19 pandemic.

“Ammika would love nothing more than for her and Aeko to be reunited with Chris,” the source said. “But their main priority as parents is the safety and well-being of their baby. Chris is not allowed to fly to Germany due to the current travel restrictions which does not allow US citizens to fly to Germany.” Since Ammika is the “parent or legal guardian of a U.S. citizen” that is “under the age of 21”, she could make the international flight from Germany back into America, but is opting to look out for Aeko’s heath and wellbeing.