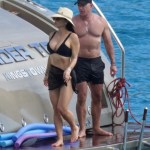 Umm… what? Shemar Moore had to unfortunately clap back at a social media troll who had a problem with him posting a shirtless pic.

Shemar Moore sharing a pic sans shirt usually elicits a very happy reaction from his millions of fans. One, however, had a problem with the legendary soap star showing so much skin in his latest sexy snap posted on Wednesday, July 29, which found him gazing off into the distance while putting his ridiculously toned abs on display. “I used to love you but I think you (have) gotten a little too much in(to) yourself,” they wrote. How rude! He had a perfect response though. “Just showing what 50 looks like… proud yet humble… do as you wish.. much love baby girl.” Oh snap!

50 looks darn good on the Oakland native who still has a penchant for making his fans thirst with each gorgeous photo he posts on his wildly popular Instagram account. He made them lose their minds at the beginning of this month where the Criminal Minds vet shared a photo of him chilling on the couch with no shirt in sight.

Shemar has been driving fans nuts for nearly thirty years now. He rose to international fame on The Young & The Restless in the 90’s where he, along with many of his costars including the late Kristoff St. John, made their audience melt with their charm, bravado and smoldering good looks.

He’s also in an elite category of hunky celebs over 45 who continue to look amazing as they get older. Another A-list hottie, Matt Damon, turned the heat up when he showed off his chiseled body during a day at the beach with his daughters on Wednesday, July 15.

If you ain’t a Baby Girl… Keep scrolling… 😜#operationnotanlines 😉

Other hunky guys leaving little to the imagination at the beach include Pierce Brosnan, 67, Hugh Jackman, 51, and Mark Wahlberg, 49. The Boogie Nights star has had his fare share of making jaws drop anytime he is seen in or by the water over the year.