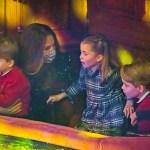 The Duke and Duchess of Cambridge have shared a sweet new photo of their eldest child, Prince George, a day before ringing in his seventh year. The birthday boy is growing up to look just like his dad!

Royalty runs in the blood. Prince George, who is about to turn seven years old on July 22, looked like the spitting image of his dad Prince William, 38, in a new portrait of the mini royal. Photo credits go towards his mother, Kate Middleton, 38! The cute portrait was shared on The Duke and Duchess of Cambridge’s Twitter and Instagram accounts on July 21, a day before George’s big birthday.

Sharing a 📸 taken by The Duchess ahead of Prince George’s seventh birthday tomorrow! 🎈 pic.twitter.com/GLPBoVsuYZ

“Sharing a [camera emoji] taken by The Duchess ahead of Prince George’s seventh birthday tomorrow! [balloon emoji],” read the caption beneath the adorable photo, in which little George flashed a toothy grin while wearing his pre-birthday attire (a posh green polo shirt). His mop of sandy blonde hair reminded us of his dad’s younger days as a student at St. Andrews University, where he met and fell in love with George’s mom. And then there’s baby William, who was pretty much twins with George!

Fans also saw the undeniable likeness between the father and son. “Lovely! Looks more like his dad every year! [heart emoji] Happy birthday Prince George!,” one fan wrote under the birthday Instagram post, while another commented, “he looks like his father!”

William just celebrated a birthday himself. The Duke of Cambridge rang in his 38th birthday on June 21, and Kate also had the honor of snapping the birthday boy as he posed with George and their two children, Princess Charlotte, 5, and Prince Louis, 2, in sweet family portraits taken on a rustic swing. George appeared to be wearing the same polo shirt in his birthday photo above, although it’s unclear if the photos were all taken on the same day (even royals can repeat outfits, we suppose).

It seems like more kids won’t be joining future family portraits. When a fan named Josh Macpalce asked Kate if she and William would be expanding their family, Kate admitted, “I don’t think William wants any more,” which HELLO! Magazine reported on January of 2020.