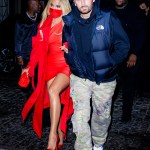 Khloe Kardashian did a ‘personal favor’ for Scott Disick by doing a photo shoot for his clothing line. Sources explain why Khloe regularly shows her love for her sister’s ex!

Nothing has rocked the friendship between Scott Disick, 37, and Khloe Kardashian, 36. While this may be surprising to some, given Scott’s drama with Khloe’s sister Kourtney Kardashian, 40, that ultimately led to their final split in 2015, we’ve learned why they’ve been able to separate family drama from their own relationship. “Scott loves Khloe like a sister and was honored that Khloe promoted his TALENTLESS line,” a source close to Scott EXCLUSIVELY tells HollywoodLife.

Tie Dye @talentless. I look so young in this photo 🤪 I love it! Lol maybe it’s the hoodie?!

On July 8, Khloe shared a photo of herself rocking a tie-dye hoodie from Scott’s clothing brand. She was proud to be repping her honorary brother’s merch, and made sure to tag his company’s Instagram account! Given Khloe’s immense platform of 116 million followers, Scott didn’t take this sweet gesture for granted.

“Scott knows Khloe has such a full plate so to take time out of her packed schedule to do a photo shoot for his line as a personal favor for him just shows how close their bond is,” our source continues. “He knows she didn’t have to do that and it means the world to him.” Scott even showed his appreciation in the comments section of Khloe’ post, writing, “Now that’s talent.”

In this selfie from 2016, Khloe Kardashian joked that she and Scott Disick are “relationship goals.” (Instaagram/@khloekardashian)

“Despite the ups and downs between his and Kourtney’s relationship throughout the years, Scott’s love for Khloe has never changed and he’s always felt a special connection with her,” our source adds. These “ups and downs” regularly aired on Keeping Up with the Kardashians throughout Scott and Kourtney’s nine-year relationship. They often had disagreements over Scott’s partying lifestyle, and even after the split, there was tension as Scott introduced his girlfriend at the time, Sofia Richie, 21, to Scott and Kourtney’s kids Mason, 10, Penelope, 7, and Reign, 5.

Khloe is just as fond of Scott! “Khloe is one of Scott’s favorite people in the world and the feeling is mutual, he’s like a second brother to her,” a second source, who is close to the Kardashian family, EXCLUSIVELY tells HollywoodLife. “She’s always got his back and is always looking out for him.”

This doesn’t mean Khloe gives Scott an easy time, however. “She’s also someone who tells it like it is to him, she never sugarcoats it,” our second insider adds. “She isn’t afraid to give him tough love when he needs it but at the end of the day she’s very protective of him. And that goes both ways too, Scott would do anything for Khloe. They’ve been through so many things together over the years, they may not be related by blood but they’re family.”

On Scott’s 37th birthday on May 26, Khloe let her love for Scott be known on social media. “Happy birthday @letthelordbewithyou!!! Life would be SO boring without you! Thank you for being such a great brother to me. Cheers to you being spoiled and I pray this year is filled with magic. You deserve only the best! We have so much more life to live 🙏🏽Forever family! I love you long time!,” Khloe gushed in the Instagram post, which included multiple snapshots of all their memories together.