Cardi B had a fiery response to an internet critic who tweeted about her daughter Kulture Kiari Cephus on Wednesday. The outspoken Grammy winner, 27, used some NSFW language after she discovered a tweet that read: “How old is Cardi’s daughter? And she still sucks on a damn pacifier smh.” 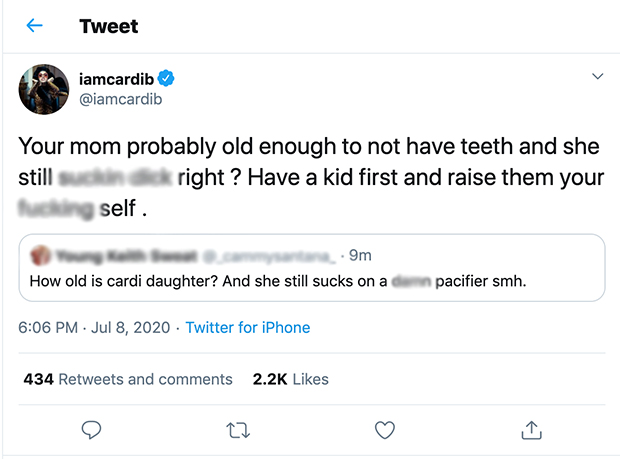 After a savage diss at the Twitter user’s “mom,” Cardi replied: “Have a kid first and raise them your f–king self.” The author of the tweet has since removed the post. It’s unclear how Cardi came across the tweet about her daughter, because she was not tagged in the post. Though, her “Bardi Gang” fanbase, which may have sent her a clue, are always looking out for their leader.

Cardi’s daughter, who she shares with husband, Migos rapper Offset, turns two on Friday, July 10. The couple welcomed their first child together in 2018, after Cardi revealed her baby bump in a white dress during a performance on Saturday Night Live.

Kulture is Offset’s fourth and youngest child. He has three small children Jordan, Kalea and Kody, from previous relationships. Cardi and Offset often share videos of their daughter bonding with his kids. And, the Bronx native has even taken to social media to note that she, along with Kulture, spends a lot of time with Offset’s kids.

Cardi and Offset celebrated Father’s Day in June with a big family dinner that included all of his children. The rap couple and their blended brood enjoyed a group dinner with friends and family at TAO in LA, as seen in photos from the outing. Cardi and Offset attempted to pose for pictures outside the celebrity hotspot, when Kulture, who was dressed in head-to-toe Burberry, crashed the photoshoot. We can’t wait to see what the couple has planned for her second birthday!