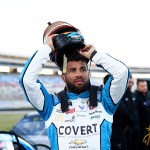 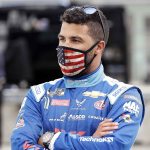 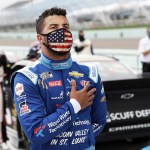 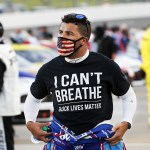 After President Donald Trump attacked Bubba Wallace and falsely said the noose in his garage was a ‘hoax,’ the NASCAR driver responded with ‘elevating’ message of hope, one that got LeBron James’ approval.

UPDATE: (7/6/20, 8:42 pm ET) NASCAR released a statement about Bubba that read, “We are proud to have Bubba Wallace in the NASCAR family and we commend his courage and leadership. NASCAR continues to stand tall with Bubba, our competitors, and everyone who makes our sports welcoming and inclusive for all racing fans.”

“To the next generation and little ones following my footsteps,” wrote Bubba Wallace at the start of his July 6 message. Bubba issued a response to the demonstrably false attack from President Donald Trump, who said that the noose discovered in Bubba’s garage stall at Talladega Superspeedway “just another HOAX.” Instead of reacting to Trump’s hate, Bubba issued a message of love to the next generation of Black men and women. “Your words and actions will always be held to a higher standard than others. You have to be prepared for that. You don’t learn these things in school. You learn them from trials and tribulations, the ups and downs this crazy world provides. You will always have people testing you. Seeing if they can knock you off your pedestal. I encourage you to keep your head held high and walk proudly on the path you have chosen.”

“Never let anyone tell you can’t do something! God put us all here for a reason,” continued Bubba, the only Black driver in NASCAR’s top league. “Find that reason and be proud of it and work your tails off every day towards it! All the haters are doing is elevating your voice and platform to much greater hearts! Last thing, always deal with the hate being thrown at you with LOVE! Love over hate every day. Love should come naturally as people are TAUGHT to hate. Even when it’s HATE from the POTUS. Love wins.”

To the next generation and little ones following my foot steps..#LoveWins pic.twitter.com/tVaV3pkdLe

It was a message that received applause from other drivers and athletes, including LeBron James. “Right HERE to with you!! As well as the next generation who follows in my foot steps! Kings and queens.” NASCAR driver Jimmie Johnson posted an image of Wallace’s No. 43 car, along with the hashtag #IStandWithBubba. At the same time, the Associated Press reports that rookie driver Tyler Reddick tweeted-and-deleted a reply to the president. “We don’t need an apology. We did what was right, and we will do just fine without your support.”

Right HERE too with you!! As well as the next generation who follows in my foot steps! Kings and Queens https://t.co/6rO5cex3ed

As the death toll continues to rise from the COVID-19 pandemic and Americans continue to face economic uncertainty, Trump turned his attention to NASCAR on Monday, July 6. “Has @BubbaWallace apologized to all of those great NASCAR drivers & officials who came to his aid, stood by his side, & were willing to sacrifice everything for him, only to find out that the whole thing was just another HOAX? That & Flag decision has caused lowest ratings EVER!” tweeted the president. This unprovoked attack came more than a week after NASCAR released an image of the noose that was found in Bubba Wallace’s garage, proving that it wasn’t a “hoax.”

“As you can see from the photo, the noose was real, as was our concern for Bubba,” Steve Phelps, the president of NASCAR, said during a telephone news conference, per The New York Times. After an investigation, federal officials determined that this noose wasn’t part of a hate crime, but was a “pull rose” for a garage door. Video footage showed the noose has been in the garage as early as October 2019, but authorities could not determine who tied it or when.

The authorities got involved after one of Bubba’s teammates spotted the nose (Bubba did not see it) and informed NASCAR. The discovery happened right after NASCAR banned the Confederate flag at events after Bubba criticized the flying of the hate symbol at races. The move angered many, and right before the Talladega race, vehicles displaying the flag lined up the boulevard outside of the Alabama speedway. On top of that, ESPN notes a plane towing a banner with the Confederate flag and the words “Defund NASCAR” flew over the track. Despite this attempt at intimidation, NASCAR stood firm behind Bubba. Before the race, every driver and pit crew member walked Bubba’s car to the start of the racing grid as a show of solidarity.