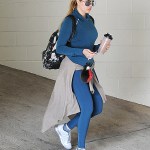 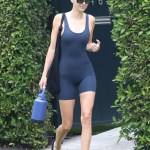 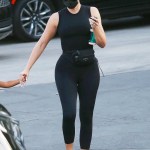 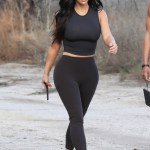 Khloe Kardashian showed off her toned body in this fitted look by Morgan Stewart Sport as she grooved to a Beyoncé tune at home!

Khloe Kardashian‘s fitness plan is paying off! The 36-year-old looked fitter than ever as she hit her home gym in a fresh new look by Morgan Stewart Sport on Thursday, July 2. The Keeping Up With The Kardashians star filmed the selfie-videos via a mirror, showing off her toned abs and lean body while wearing the line’s neutral colored “Buttercream Sports Bra” ($78) and matching “Buttercream Biker Short” ($68). Khloe accessorized with a ’90s inspired pink scrunchie on her wrist, which matched her blush colored sneakers.

Khloe working out today in her new @morganstewartsport fit

“Am I @morganstewart yet in my @morganstewart sport?” she captioned the first video using the RETRODust Instagram filter, going on to tag the brand in a second post. Fittingly, she was grooving to Beyoncé‘s 2013 tune “Yoncé,” where she describes being in shape. “Radio say speed it up I just go slower/High like treble, pumping on them mids/Ya man ain’t never seen a booty like this,” Queen Bey could be heard rap-singing in the background.

Khloe’s new brown hair looked incredible in the videos, which she recently revealed she changed in quarantine. Answering a fan question about how she kept up with dyeing her locks blonde, Khloe admitted it was “annoying.” She added, “That’s why in quarantine I just couldn’t keep up with it. I sad f— it, I’m going back to dark,” referencing her naturally brunette hair. “My heart is with blonde. But sometimes a girl just needs to change. I’ll always go back to blonde I just think I need a little something different right now,” she posted after fans began a poll of which color they prefer on her.

The latest posts come just days after she stunned at her 36th birthday bash, planned by party extraordinaire Mindy Weiss. Khloe dazzled in a custom gold Yousef Aljasmi mini dress for the event, sweetly twinning with 2-year-old daughter True. Opting to keep her long brown hair sleek and straight, she looked like she had an amazing time with her family, including mom Kris Jenner, 64, and sisters Kourtney, 41, Kendall, 24, and Kylie, 22. Brother Rob, 33, was also in attendance, and looked better than ever as he revealed his dramatic weight loss!