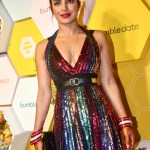 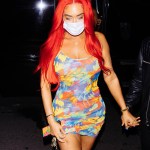 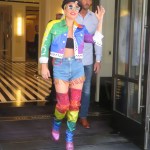 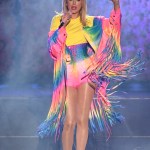 Stassie Karanikolaou, who is often seen out with her longtime BFF Kylie Jenner, looked absolutely amazing in a fierce red wig while out and about in Los Angeles.

We have arrived! Anastasia Karanikolaou, otherwise known to millions as simply “Stassie”, made quite the entrance when she showed up to a Pride celebration at 40 Love in West Hollywood on Saturday, June 26. The 23-year-old made sure it was an all eyes on her kind of situation in her super short multi-colored dress that she paired with a fiery red wig. She and her sexy friends also put their safety in check by wearing protective face gear amid the worldwide Coronavirus pandemic.

Kylie unfortunately was not with her during Stassie’s latest outing. Instead she stayed indoors for her older sister Khloe Kardashian‘s wild 36th birthday party that was attended by many of her other family members. The bday gal’s daughter True, 2, also made a memorable appearance when her doting mother posted a clip of her bopping around on an inflatable bouncy house!

Stassie has emerged as a major fashionista over the past couple of years. The model left little to the imagination while looking absolutely stunning in a pair of Daisy Dukes and tank top with her midsection exposed in a funny yet sexy Instagram pic of her chowing down on a hot dog late last month.

She also played her part in helping promote Kim Kardashian‘s ever growing SKIMS line on May 3. Stassie once again took to her social media and modeled a new, comfortable tan outfit from the loungewear portion of Kim’s business that expertly showed off her amazing figure.

What a helpful friend! Stassie also made sure to make millions of people green with envy when she gave a tour of Kylie’s whopping $36.5 million dollar mansion. She also showed her 938K TikTok followers a detailed look at the beauty mogul’s lavish car collection that included an ultra-exclusive white Bugatti Chiron which sells for nearly $3 million dollars!