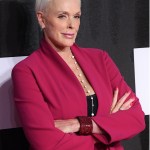 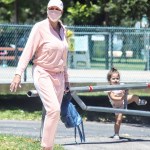 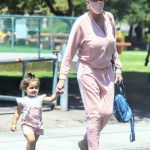 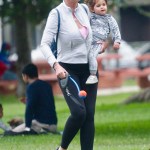 Actress Brigitte Nielsen took a break from self-isolating with her one-year-old daughter Frida, and enjoyed a fun day at the park.

Brigitte Nielsen, 56, stepped out with her adorable one-year-old daughter Frida amid COVID-19 lockdowns in California. The mother-daughter duo seemed to be enjoying the fresh air when they were snapped walking at the park on June 5. Brigitte, who gave birth to her fifth child at the age of 55, cradled her mini-me as they played with their dog.

The family’s pup also joined them for their park outing, as Brigitte carried a tennis ball and stick. It comes amid strict quarantine restrictions in California, which have forced the mom and her “miracle baby” to isolate indoors for the majority of 2020. The actress first gave fans a glimpse of her baby girl in Nov. 2018, after giving birth to her in June of that year.

“I told you that you could fly,” she captioned the mother/daughter shot, which featured Brigitte and baby Frida sitting on an airplane. The newborn, who was wearing a gray onesie which featured a white polka dot design, was reaching out for her mom’s face with both arms while the Rocky IV actress smiled down at her. Too cute!

Not only did the mother-of-five try for ten years to have a child with her husband Mattia Dessi, 40, but she’d also never had a daughter! Brigitte, who was previously married to Kasper Winding, 62, Sylvester Stallone, 72, Sebastian Copeland, 54, and Raoul Meyer, 58, has welcomed four sons. Julian Winding, 34, arrived first, followed by Killian Nielsen, 28, Douglas Meyer, 25, and Raoul Meyer Jr., 23. And then Frida came along to flip the switch!