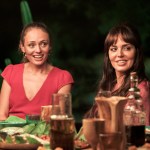 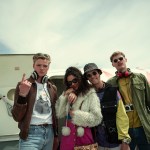 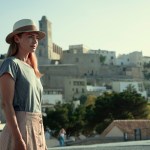 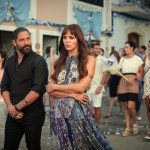 White Lines was released on Netflix on May 15 and has captivated the world. While watching, everyone wanted to know: who killed Axel all those years ago? The answer was finally revealed in the season finale after so many twists and turns. The big reveal that it was Anna, with Marcus’ help, was even more shocking than we could have imagined.

HollywoodLife talked EXCLUSIVELY with Marta Milans about Kika’s journey throughout the season. While there was a moment she thought Kika could have killed Axel, she ultimately knew Kika “loved him way too much.” She also revealed that the role of Kika was written for her and discussed Kika’s complicated relationships with her family and Marcus.

When you were looking into the role of Kika, what was it about her you were drawn to?
Marta Milans: I have to say that I was lucky enough to have Álex Pina, the creator of a wonderful show called Money Heist and before that a show called The Pier. I starred in Shazam almost two years ago, and I flew to Europe to do The Pier. While filming that, he was developing White Lines, and he really wrote the role for me. That’s why the role is so close to me and is pretty much an extension of Marta in many, many ways. When he was telling me about Kika before the scripts were even written and pitching me the story of my family, I told Alex, “That’s a little out there, dude. Are people going to think we’re completely bonkers insane? Are they going to relate to us with a brother that wants to f*ck his own mom and the running of the drug cartels in Ibiza?” Alex kept saying, “Milans, Milans, Milans, just trust me.” And I did. Look at us now.

What did you love the most about exploring Kika’s complicated family dynamics?
Marta Milans: I come from a very normal, loving family, so it was interesting and fascinating to explore a really dysfunctional family unit. One of the things that is unique about White Lines versus any other family dramas is that we’re used to seeing families falling apart in an arc of the season. In the case of Álex, he said he wanted to do it the other way. He said he wanted to start with a family that’s completely torn apart by history, by circumstance, by the relationships, and wanted to try to build that back up. He wanted to try to bring them back together. In the arc of the family in season 1 of White Lines is a completely destroyed family and whether or not we succeed in coming back together for good is still to be seen, but we certainly try.

Did Álex tell you right off the bat who killed Axel or did you have to wait until you got the scripts?
Marta Milans: No, no, no, we didn’t know. He didn’t want any of us to know. We got episodes 8, 9, and 10 a little late in the process of filming. We only found out towards the end. When us actors found out it was Anna, I went back to the dinner scene. Danny [Mays] and Angela [Griffin] had both been told by our director but no one else knew. I think it serves a purpose because that dinner scene, that major moment where we all air our history and our resentment towards Axel, had we known [who killed him] it would have informed the scene differently. I think it was a good idea to let us know later in the process.

Was there ever a moment before you found out that you thought Kika may have done it?
Marta Milans: I thought so, but she really is pure heart. Kika doesn’t have a bad bone in her body. She may be slightly irresponsible and might be superficial at times, but she truly just means well. I knew in the bottom of my heart that it couldn’t be Kika. She loved him way too much. I know that sometimes doesn’t mean anything with crimes of passion and whatnot, but I didn’t really think about that too much.

That last episode had a quiet, powerful moment with Kika and Marcus where she tells him that Axel told her that he slept with Anna. What was that like for you to expose a little bit of those secrets and really set things in motion a little bit with Marcus?
Marta Milans: I was surprised when they told me that I was going to get with Marcus. I really didn’t see that coming at all. He’s still in love with Anna throughout the entire show. I was wondering if he was using her or not using her, but then Álex said to me, “Listen, you are both very lost, but you’re both truly good people, so I want you to come together in the hope that you will learn some differences and learn what from what has been happening to you along the season, so that into the future you guys can build something together.” I thought of that as an interesting choice for Kika’s character. Looking back now, when I do tell him that Anna slept with Axel, I don’t remember if I knew by then if it was Anna. It was a beautiful to work with Danny, who is such a brilliant actor in every way. It was a very emotional scene to see him react in such a profound state of deception and betrayal. He loved her [Anna] so much for so long and supposedly finds out then that she betrayed him. It’s also emotional for me as Kika because we’re just starting this love story. To see someone so heartbroken by someone else when you are starting a story with that person can leave you feeling insecure. It’s so complicated in emotion, both my emotions and his emotions. That’s what Alex does. Alex throws crazy storylines and complicated, layered emotional characters together.

Do you think they could possibly make it work?
Marta Milans: I’ve spoken to Alex a lot about season 2 and what we could do with it. I do believe that if things go well that we could see Kika and Marcus maybe taking the drug cartels together and probably screwing everything up for everybody, but at least convinced that they can try at least together. That could be an interesting storyline and a funny one for sure.

Is there anything else you’d like to explore in a potential season 2?
Marta Milans: I think probably coming to terms with her relationship with her mother. There’s a very powerful line that Álex wrote for me where Kika’s mother says, “I finally want to tell you the truth.” Kika says that she doesn’t want her truth. She wants protection from her mother. We all want to feel protected by our mother. Kika has never felt protected. She’s always felt abandoned by her dad because she was sent away so young. I feel coming to terms with forgiving that abandonment and forgiving that lack of protection is something that anybody wants to have from their parents. But if they don’t have that in their childhood, it certainly leaves a wound. That’s why she runs away from everything because she feels that she’s not safe anywhere. That’s really sad. I think investigating that in a future season would be definitely healthy for her psychologically.