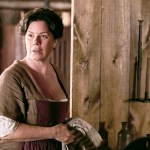 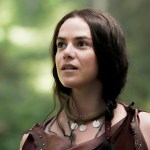 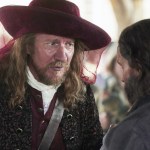 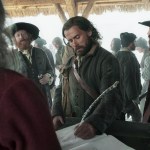 The bestselling novel ‘Barkskins’ is coming to life in a National Geographic miniseries. HL spoke EXCLUSIVELY with the cast to get the scoop about their characters and immersing themselves in such an ‘extraordinarily different’ time.

The National Geographic limited series Barkskins premieres May 25. The show is based on the bestselling novel by Annie Proulx and follows a group of outcasts and dreamers facing the hardships of the frontier, competing interests, and complicated loyalties. Barkskins also explores the mysterious massacre of settlers in the vast and unforgiving wilds of 1690s New France that threaten to push the region into war. HollywoodLife spoke EXCLUSIVELY with cast member David Wilmot, Thomas M. Wright, and Lily Sullivan during the show’s virtual press junket about where their characters fit into this landscape.

David plays Constable Bouchard, who is “the local police. He’s kind of an old drunk, but he kind of goes on a surprising journey later on. I’m just kind of the beaten, broken local cop.” As for Thomas, Elisha Cooke is an “early industrialist and entrepreneur and a person with a very different set of principles.” David noted that Elisha has a “poetic bent,” and Thomas added that his character has a “romantic, very expansive idea of reality, but primarily he’s also trying to make an enormous about of money and lay the foundations to become wealthy…”

Lily’s character, Delphine, is one of the Filles du Roi. She explained that a Filles du Roi is “one of the ‘king’s daughters,’ which they were definitely not the king’s daughters. They were very much hustlers, [who were] very, very poor, desperate women in desperate need for a beginning, a new start. To get on a boat for 3 months that was overloaded, full of disease, and arrive to a land that is so raw and very much not tamed. Delphine’s a woman definitely fleeing suffering to then enter a whole new world of suffering.”

Annie’s book is an expansive 700-page epic. Thomas noted that “the show really takes the first chapter of the book, which is really the detailing of that particular period of time… It’s about the early days of colonization of that landscape, the frontier wars, and the violence against the native populations, and the landscape.”

David said that racism is a major theme of the limited series. “I play somebody who is racist. I’m not sure that’s what you’d call them then because it’s like Christians against heathens or ‘savages,’ as my character says. But the people are tough and resilient, and there’s always something admirable about resilience, which they certainly have to be.” Thomas followed with, “The principles are extraordinarily different during that time. The whole undercurrent of the show is intense racism, but as David said, it’s not recognized as that at the time. I think there’s complex questions in there about human nature and what people thought the will of God was, that it was so sacrilege to have untilled land and these landscapes were provided for people to bend to their will.”

The series was shot 40 miles outside of Quebec City, which was known as New France back in the 1690s. Lily admitted that “shooting in that beautiful setting where these ancestors walked and where this story took place was definitely chilling at points.” She said the experience was “beautiful and extremely informative. You really could feel the vulnerability and fragility of these people desperate for a new beginning, which really explores migration and immigration and large numbers of people feeling displaced and starting again because something’s not enough, something’s not served in society.” Barkskins will premiere on National Geographic and the next day on HULU.