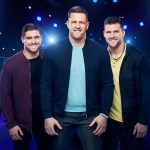 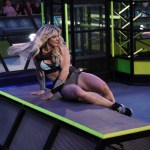 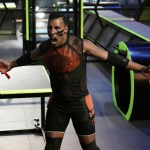 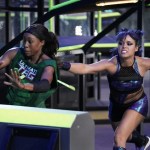 The childhood game of tag is getting a major twist with ‘Ultimate Tag,’ which premieres May 20. HL spoke with cast members Travis DesLaurier and Brooke Ence about what the show is all about and more.

Ultimate Tag is a high-octane physical competition show based on the classic game of chase. The show is co-hosted by NFL superstar sibling trio JJ, TJ, and Derek Watt. Each week, the competitors must vault, dodge, tumble, and dive over various epic, three-dimensional moving courses in an attempt to not get caught. As competitors progress, they are challenged to take on even more extreme courses and earn points for their performance in each game. HollywoodLife talked with competitors Travis “Beach Boy” DesLaurier, 33, and Brooke “The Boss” Ence, 29, about all things Ultimate Tag.

“It is just a new type of show. The people that don’t understand what Parkour is or don’t understand that world, it is different and so exciting for that reason,” Travis told HollywoodLife. “I would like to say that it is a combination of the American Gladiator show back in the day, American Ninja Warrior, and flag football if they had a baby. That is essentially what it is. There are five obstacle courses, and I feel very lucky and privileged to have one of these positions as a pro tagger. It is a lot of fun. These contestants come in to compete against us in these obstacle courses for money. At the end, there is one female winner and one male winner. It is really exciting the way they intro our characters. They really build us up to have our own personalities and things going on and that part of the show is going to be fun and entertaining in combination with the personal stories of the contestants who come on.”

Brooke also noted that Ultimate Tag is a mix of American Gladiator, American Gladiator, and flag football. “It is really high intensity,” she added. “You have to really have a lot of body awareness and think on the fly because you are moving at your top speed. As a tagger to tag someone, you are moving at top speed to get away from a tagger, but a lot of things get in your way, so there are a lot of things that dig you in a corner or if you are not aware of your footing or how to move through and over and around objects, you can kind of beat yourself up.”

As for who they’d like to see in a celebrity edition of the show, Travis admitted that he’d like to see Dwayne “The Rock” Johnson. “There is no way I am not tagging him, and he can’t get me back!” Travis laughed. Brooke said it would be fun to tag Rob Gronkowski.

If you’re going to be on Ultimate Tag, how would you train for it? Travis weighed in and gave his advice. “Because it is a skill and a lot of quickness, to train for it I would say a lot of cardio. Because sometimes when you are trapped in there and trying to get away if you don’t have the cardio stamina, then you are going to lose right there! To train for that, you might need to go do Parkour or go to jungle gyms, anything free running, and using the environment to get away. That is a huge technique.” Ultimate Tag will air Wednesdays at 9 p.m. on FOX.