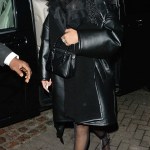 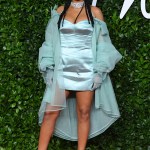 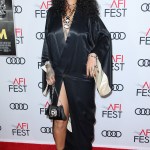 Rihanna had a blast with a couple of her friends when she joked around and in Fenty Beauty’s latest video, which promoted 10 shades of the brand’s first collection of blushes.

“Shots and swatches,” anyone? That’s exactly what Rihanna, 32, and two hilarious members of her crew just did to promote her latest Fenty Beauty release — a stunning collection of 10 cream blushes — on YouTube! “Let’s talk about cream blushes!” the makeup mogul opened the video, showing off her flirty bob and glowing skin. “We’re going to show you our cream blush which is Fenty Beauty’s very first blush ever. It’s all about cheeks out in the summer,” she added, going on to ask her laughing male crew member, “What’s your definition of cheeks out? I’m talking about the actual cheeks on my face!”

From there, the trio — who appeared to be hanging in a glam room — went on to show her millions of followers the various shades of the “Freestyle Cream Blush.” Up first? The rosy-brown hue “Rosé Latte”! “What else would you call this color?” Rih asked the only dude in the room, who suggested “pinky brown?” He was such a good sport as he allowed the “Umbrella” singer to put some of the blush on him for the camera! After swatching the color on their arms, the group downed shot number one of ten! While they didn’t say what they were drinking, the dark colored liquor looked like it could be Jameson whiskey (a Rihanna fave, as per her 2011 tune “Cheers”) or an añejo tequila!

The Savage x Fenty founder looked so stylish for the casual video, opting for a the luxe barley-colored “Scarlet” sweater by NY-based line Khaite. She paired the three-button pricey cashmere cardigan with the matching “Eda” bralette — also in the brand’s neutral barley tone — along with various jewelry pieces, including a black diamond pinky ring by Shay Jewels, and a pearl and silver necklace by designer Will Shott. If Rihanna’s outfit looked familiar, the exact sweater-and-bra combo went viral after Katie Holmes rocked it in Aug. 2019!

The group continued the show-and tell with the different colors, including the hot-pink “Strawberry Drip,” lavender purple “Bikini Martin,” and the dark magenta “Drama Class.” By the time they got to shade number six — burnt orange shade “Fuego Blush” — they were in near-tears laughing as they attempted to show off the color!  “Giving you fuego!” her female friend laughed, as Rihanna explained you could use the golden hue as both a blush and a highlight. “I left the two best for last,” the Grammy winner added, showing off peachy blush “Petal Poppin'” and burgundy colored “Summertime Wine.”

The new product is the perfect addition to Rihanna’s highly successful beauty brand, which debuted back in 2017! Packaged in a chic white compact with the word “Cream” written across the front, the product is already being hailed for it’s light,  buildable and non-greasy formula. Easy to apply with just your fingers, we can definitely see this being a summer go-to for a little color and shimmer.