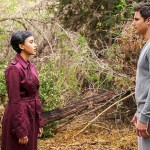 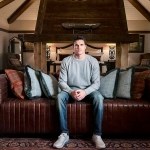 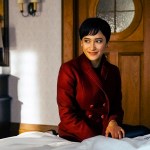 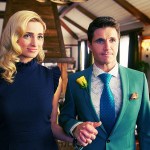 The first season of ‘Upload’ was quite the roller coaster. HL spoke with Robbie Amell about Nathan and Nora’s intense and unique connection, that emotional finale moment, and hopes for a potential season 2.

Amazon Prime Video’s delightful new series Upload premiered May 1. Over the course of the first season, we fell in love with Nathan and Nora as their connection grew stronger. After Nathan’s sudden death, he was “uploaded” to Lakeview, a digital afterlife. His customer service “Angel” was none other than Nora. As Nathan adapted to his new afterlife, Nora was there every step of the way. Their bond transcended the screen between them and they fell in love. Robbie Amell spoke EXCLUSIVELY with HollywoodLife about Nora and Nathan’s unconventional relationship.

“I think what’s really beautiful is the separation between them makes them create this bond without the physicality, and it forces them to get to know each other as people and on the mental level without the physical,” Robbie told HollywoodLife. “It’s so funny. My wife and I watched Love Is Blind, and there’s a little bit of that in there. It’s not that they didn’t see each other, but they couldn’t touch each other. They had to just learn who the other person was. I think that there are really interesting things that are remarked [about] along the way. Like when Nora’s dad is talking to her and he’s like, ‘Well, do you think that you just like him because you’ve seen all his memories?’ I just think that’s it’s such a real question. She’s seen so much of this guy that would take years to learn about somebody else. I think that’s just very cool and it shows that this love can break down barriers, and it doesn’t matter where you are or how much access you have to the other person physically. You can develop this relationship on a different level and you can’t really help who you fall in love with.”

The season finale featured a heartbreaking scene where Nora professed her love for Nathan as he ran out of data. Before he could respond, his gigabyte level reached 0 and he froze — with a single tear running down his cheek. “I thought it was really beautiful,” Robbie said about the scene. “He tries to say things to her, and then she says things to him. You can tell that it’s everything he wanted to hear. He wants to say something, and she cuts him off to finish what she’s saying. And then it’s just too late. He’s frozen. But I think that, ultimately, he heard enough, and you hope that she knows how he feels. But there’s a little bit of a wrench in the relationship right now, for sure. I think that it was really beautiful in the way that Greg [Daniels] framed that.”

Just when you thought that was the end for Nathan, Ingrid walked in and added more data to his account. She also admitted that she “uploaded” for him. Nathan used the rest of his recently-added gigs to freak out over Ingrid’s decision. Robbie noted this is a full-circle moment for Nathan and Ingrid. “I love the dynamic between Nathan and Ingrid, just from a comedic perspective,” Robbie said. “I think it’s really fun. I think that Allegra [Edwards] is hysterical. I really like the idea of her being there now because he’s back to where he was at the beginning of the show. This is just speculation, but I think it would be really funny in season 2 if he’s trying to like pawn her off on somebody else. If he’s like introducing her and trying to find her a new boyfriend when she thinks that they’re still together.”

Throughout the season, Nathan comes to the realization that he wasn’t necessarily the nicest guy when he was alive. At first, he’s unhappy in the afterlife but comes to love the people that he’s met and the person he is now. “Even though this is kind of his second life, it might be a little better than the first one he had because of the relationships he’s made and the decisions that he’s made as a man,” Robbie told HollywoodLife. “I think he’s grown up a lot. I think it’s really sad when he gets his memories back, and he realizes that he’s not the person that he thought he was. The show talks about a lot about whether we are the decisions we’ve made or if people can change… I think that’s something that people in their mid to late 20s will struggle with because people make mistakes growing up in learning who they are and what they want to be and who they want to be. I think people should be able to change and be someone different.”