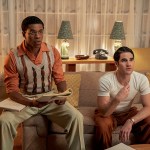 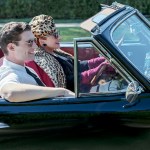 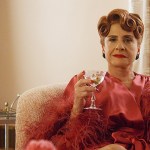 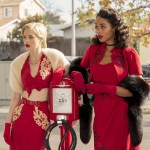 ‘Hollywood’ hits Netflix on May 1 and the new series features fictional and real-life people from Hollywood’s Golden Age. From Rock Hudson to Claire Wood, we’re breaking down who’s a real person and who’s not.

Hollywood’s Golden Age is getting a rewrite in Ryan Murphy and Ian Brennan’s new Netflix series Hollywood. The limited series follows a group of aspiring actors and filmmakers in post-WWII Hollywood as they try to make it big in Tinseltown. Many of the characters in Hollywood are fictional, but their lives are intertwined with a number of real-life icons. Think Once Upon a Time… in Hollywood but Ryan Murphy style.

Hollywood revises history, exposes the darker side of the Golden Age, and shines a spotlight on the unfair systems and biases across race, gender, and sexuality. Before the 7-episode limited series hits Netflix, get to know the characters with our guide. The cast includes notable names like Jim Parsons, Patti LuPone, Darren Criss, Holland Taylor, and more. Who’s real? Who’s not real? HollywoodLife is breaking these characters down for you ahead of your binge-watch.

Jack Castello (David Corenswet): He’s a newly married 23-year-old World War II servicemen and farm boy from Missouri. Jack dreams of being a Hollywood star and he’ll do just about anything to make it happen. Status: FICTIONAL

Archie Coleman (Jeremy Pope): Archie is a screenwriter and determined to become one of Hollywood’s first successful black screenwriters. However, Archie knows that being black and gay in 1940s Hollywood comes with major obstacles. Status: FICTIONAL

Rock Hudson (Jake Picking): Rock is a good-looking small-town boy from Illinois. In the show and in real-life, Rock becomes one of Hollywood’s biggest heartthrobs who starred in movies like Giant, Pillow Talk, and more. Rock died from AIDS-related complications in 1985. Status: REAL PERSON

Raymond Ainsley (Darren Criss): Raymond is a first-time director ready to make a hit with his very first film. Even though he “passes” for white, Raymond is actually half-Filipino (like Darren is in real-life). Status: FICTIONAL

Camille Washington (Laura Harrier): Camille is the only black actress on contract at Ace Studios. Camille aspires to be a major movie star, but her acting opportunities are unfortunately limited — for now. Status: FICTIONAL

Hattie McDaniel (Queen Latifah): Hattie pops up a few times throughout Hollywood and is a mentor to Camille. Even though Camille is a fictional character, Hattie is very real. Hattie played Mammy in Gone With the Wind and made history as the first person of color to win an Oscar for her performance in the 1939 epic. Status: REAL PERSON

Vivien Leigh (Katie McGuinness): Vivien makes a few appearances throughout Hollywood. Vivien starred as the one and only Scarlett O’Hara in Gone With the Wind and played  Blanche DuBois in the film version of A Streetcar Named Desire. She won two Academy Awards over the course of her incredible career. Status: REAL PERSON

Claire Wood (Samara Weaving): Claire is an aspiring actress at Ace Studios. Like Avis, she takes an interest in Jack. Status: FICTIONAL

Ernie (Dylan McDermott): Ernie is the owner of Golden Tip Gas, which is both a service station and high-end brothel. Status: FICTIONAL

Dick Samuels (Joe Mantello): Dick is a longtime executive at Ace Studios. He’s a closeted gay man and becomes set on breaking boundaries for the underrepresented in film. Status: FICTIONAL

Anna May Wong (Michelle Krusiec): Anna is a Chinese American actress. She starred in movies like The Thief of Baghdad, The Toll of the Sea, Bombs Over Burma, and more. Anna is considered to be Hollywood’s very first Chinese American movie star. Status: REAL PERSON

Ellen Kincaid (Holland Taylor): Ellen is a veteran talent manager who works alongside Dick. She has quite the eye for talent. Status: FICTIONAL