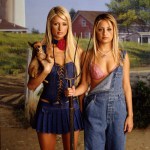 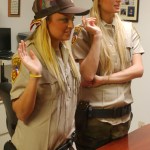 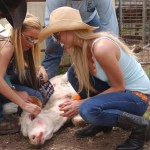 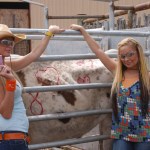 Nicole Richie confessed to Naomi Campbell on her YouTube show ‘No Filter’ how much she regretted having her hand inside a cow on ‘The Simple Life,’ revealing that ‘feeling will never leave my body.’

Nicole Richie has had her fair share of wild experiences — some of which have been captured on camera! Nicole, 38, confessed to Naomi Campbell on the model’s, 49, April 8 episode of No Filter with Naomi just how much she regretted one specific instance from her time filming The Simple Life. Fans will remember the moment well, when Nicole put her hand in a cow on the fifth episode of the series’ first season! The memory still doesn’t sit well with the mogul to this day. “I don’t think I said ‘no’ in my 20s,” Nicole revealed of her time on the reality TV show. “I think I did everything, but sticking my hand inside a cow was not necessarily something I planned on doing,” she confessed.

The former Simple Life star further explained, that there was a lot of “pressure” for her to go through with the act. She even still recalls how it felt to this day. “That feeling will never leave my body,” Nicole admitted. “Because they’re fighting you. It’s like a 5-second commitment.” It was one of the series’ most memorable moments. And even saw Nicole chase her former BFF Paris Hilton around the cattle ranch with her used glove on her hand!

Nicole was only 22-years-old during the reality TV series’ first season. The show memorably followed Nicole and Paris throughout the country as the two socialites took on various jobs in the service industry, while trying to keep their luxurious lifestyle afloat. The show lasted from 2003-2007 and spawned only five season with 10 episodes each. Since then, Nicole has definitely grown up quite a bit!

In 2010, Nicole married rocker Joel Madden of the group Good Charlotte. Prior to their nuptials, Nicole and Joel welcomed their daughter, born January 2008, and then their son in September 2009. Nicole has kept her private life a lot more quiet since her days on The Simple Life, and it’s clear that she has definitely learned a lot since then, too!