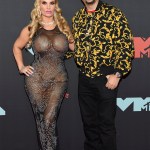 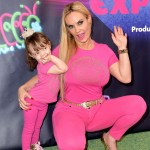 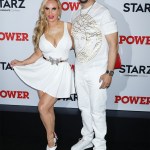 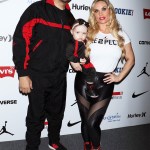 Ice-T and Coco get an interesting reading in this EXCLUSIVE preview of the ‘Celebrity Ghost Stories’ premiere. Ice-T is a skeptic of the paranormal, but Coco listens very closely to the psychic medium.

Psychic medium Kim Russo conducts a reading on Ice-T and Coco Austin, who guest star in the Celebrity Ghost Stories premiere on April 8. Kim tells Coco that her grandmother has told her about Coco’s dogs. Kim points out that one of Coco’s dogs has something wrong with his eye. When Kim says that without any previous knowledge, even Ice-T is taken a little aback by it. Kim mentions drops and Coco says she uses drops on her dog every day.

“Did another dog bite the eye? I see a tooth going into the eye,” Kim asks Coco. Coco believes that’s what happened. Coco says her dog got into a fight at the dog park and had scabs all over his eye. “I do see [him] eventually going blind. I don’t see you can fix this eye,” Kim reveals to Coco.

Coco admits she hasn’t been able to do anything about her dog’s eye for 2 years now. “It was pretty damn amazing when she said something about my dog’s eye because no one knows that story, only Ice. I didn’t even open up to my friends about that,” Coco says. Kim tells Coco that her grandmother has been telling her all this information and is giving Coco “validation that she’s there.”

Ice-T still isn’t completely sold on the psychic medium. He’s still a skeptic at the moment. Celebrity Ghost Stories follows Kim as she brings some of the biggest names in entertainment back to sites where they have had previous paranormal experiences. Ice-T and Coco explore a haunted New Jersey factory where Ice-T previously filmed. Celebrity Ghost Stories airs Wednesdays at 10 p.m. on A&E.